A CNN ‘Journalist’ Is Really Queasy About the U.S. Dropping the ‘Mother of All Bombs’ in Afghanistan 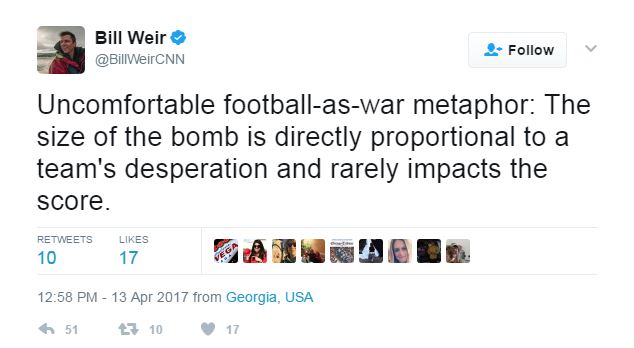 In the moments after CNN first reported Thursday afternoon that the U.S. military dropped the “mother of all bombs” on an ISIS tunnel in Afghanistan, their Wonderlist host Bill Weir complained about the bomb’s significance, claiming ina tweet that it marked a sign of “desperation” by the U.S. that won’t have an impact on destroying ISIS.

Weir cited the analogy being used of measuring the bomb’s blast in terms of football fields as making him “uncomfortable.”

“Uncomfortable football-as-war metaphor: The size of the bomb is directly proportional to a team’s desperation and rarely impacts the score,” Weir wrote.

One has to wonder what Weir would suggest as a better option. Dropping one of the most powerful non-nuclear bombs ever instead of putting American lives at risk was almost surely something the military took into account.

Further, ISIS has relied on tunnels to get around there instead of exclusively operating out in the open. Isn’t that a sign of desperation? In war, dropping a powerful bomb or carrying out a bombing campaign has been employed throughout human history to successfully cripple adversaries (ex. U.S. bombing runs in Germany and Japan during World War II).

Back to the present, Weir stated in a previous tweet: 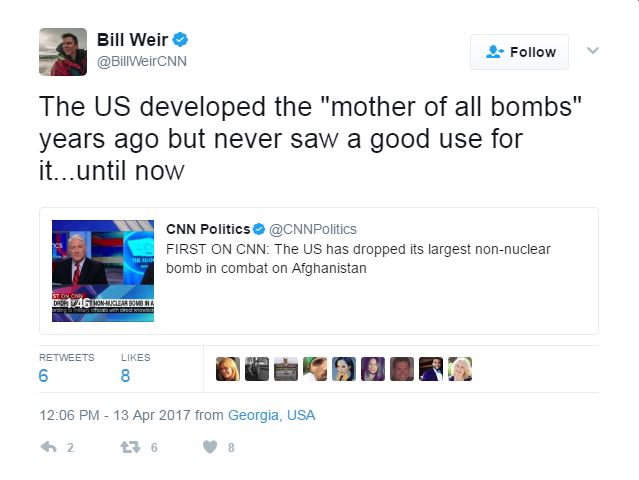 This is not the first time the former ABC News reporter has stepped on a rake in a tweet. In July 2014, Weir was caught attacking Fox Nation, calling them “ignorant fucksticks.” The reason? Fox Nation simply posted a story knocking Al Gore and his global warming activism.

Weir was forced to apologize hours later, stating that his “glop of Midwestern guilt stuck in my chest prob won't go away until I apologize to @foxnation for name-calling.” It added that it was a “[d]umb [m]ove” on his part.