The “big three” networks of ABC, CBS, and NBC continued their shameful blackout into Wednesday night of the horrifying alleged rape of a teenage girl in a Washington D.C. suburb high school bathroom by two men, including one here in the U.S. illegally.

Instead, the pathetic liberal media that’s shown no interest in the Rockville High School case complied with Rolling Stone in giving over 10 minutes of coverage in two days to the fake 2014 claim that a University of Virginia fraternity gang raped a female student.

Before breaking down how blind the media were in furthering a narrative about college fraternities and sexual assault (which can be a noble cause), the pro-illegal immigrant media were surely displeased with the Fox News Channel’s Special Report as it again offered a story on the events in Montgomery County, Maryland.

Fill-in host James Rosen noted that “the Maryland State House of Delegates has approved a bill to make Maryland a sanctuary state...just days after Maryland authorities charged two immigrants, one of them confirmed to be here illegally, in the alleged rape of a 14-year-old girl in a Rockville High School bathroom.”

Correspondent Doug McKelway provided the latest from the school and told viewers how the cowards with the school district banned TV cameras from Tuesday’s packed PTA meeting as “[t]he red-hot controversy...lit up social media.”

McKelway also noted how the school district has shifted their focus from the rape to blaming average citizens for being outraged about how such a thing could have happened.

At the same time, local and state Democrats went ahead with their desire to make Rockville and Maryland a sanctuary city and state, respectively. This was despite strong opposition from Republican Governor Larry Hogan.

This lack of seriousness by the liberal media was no issue back in fall 2014 when Rolling Stone detailed a graphic gang rape of a young woman at a University of Virginia fraternity.

Without corroborating any of the facts, ABC’s World News Tonight spent 4 minutes and 30 seconds on the allegations on November 23 and 24 of that year. NBC Nightly News and serial liar Brian Williams had 4 minutes and 16 seconds over those same two days. CBS Evening News was third with a single, 1-minute-and-56-second segment on the 24th.

I initially wrote about this on December 6, 2014 after it had become clear that the Rolling Stone story wasn’t true and, you know, fake news.

In that post, I noted that the coverage total was much higher, but I included opening teases for the newscasts. The coverage by the same evening newscasts was far lower on December 5, 2014 about the rape being fake news to the tune of seven minutes and 28 seconds.

Funny how that works whenever the liberal media is discovered to have egg on their faces.

Here’s the relevant portions of the transcript from FNC’s Special Report with Bret Baier on March 22: 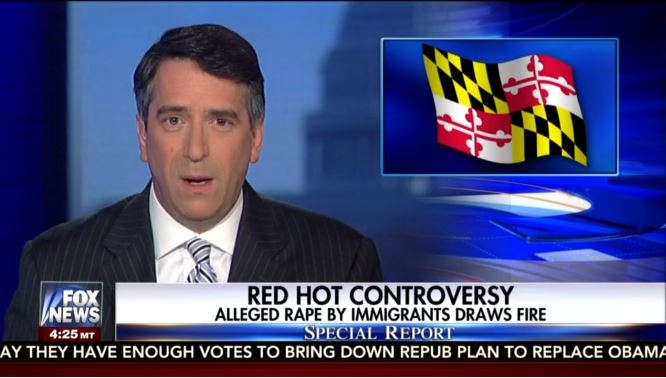 JAMES ROSEN: Amid a national debate over how to contend with illegal immigration, the Maryland State House of Delegates has approved a bill to make Maryland a sanctuary state, meaning one in which whose law enforcement officers do not cooperate with federal authorities in the lawful deportation of illegal immigrants. The delegates vote occurred, moreover, just days after Maryland authorities charged two immigrants, one of them confirmed to be here illegally, in the alleged rape of a 14-year-old girl in a Rockville High School bathroom. Correspondent Doug McKelway has been on the story all week and brings us the latest.

DOUG MCKELWAY: TV cameras were barred from Rockville High School’s PTA meeting last night where school administrators tried to calm concerned parents about Thursday’s rape of a 14-year-old, allegedly by two immigrant students, but it didn't keep concerned citizens from videoing from their cell phones and expressing their dismay.

UNIDENTIFIED MONTGOMERY COUNTY RESIDENT: I am really outraged by the situation in Montgomery County. I am a lifelong resident.

MCKELWAY: The red-hot controversy has lit up social media. One tweet reading: “If the #rockvillerape had been committed by White college frat boys, we’d never hear the end of it, it would be on blast, everywhere 24/7.” Hot tempers on one side matched by those on the other.

MCPS SUPERINTENDENT JACK SMITH: Some have been from people who used really racist, hate-filled rhetoric about different people based on different personally characteristics. 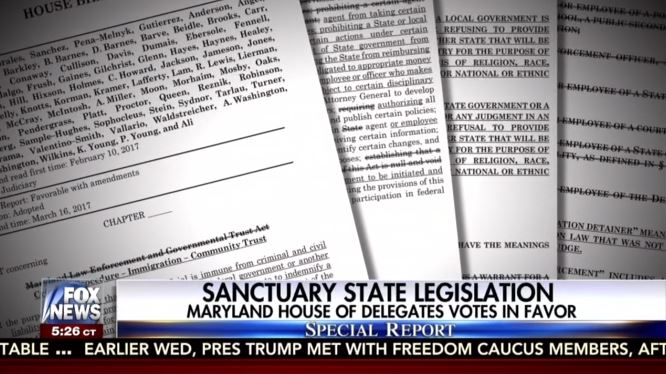 MCKELWAY: The controversy heightened Rockville City Democratic Councilman Julie Palakovich Carr introduction last month of an ordinance to make this a sanctuary city. Carr did not respond to repeated requests for interviews. Also, the Democrat-dominated Maryland House of Delegates voted this week 83-55 to make Maryland a sanctuary state. The legislation was introduced last month after President Trump’s inauguration by a delegate from Montgomery County.

MCKELWAY: But Mayrland’s Republican Governor, Larry Hogan, is having nothing to do with it.

MARYLAND REPUBLICAN GOVERNOR LARRY HOGAN (Md.): We are going to do everything we can to kill this bill. We’re going to first try to kill it in the Senate and then, if it passes there, I’m going to veto it immediately. 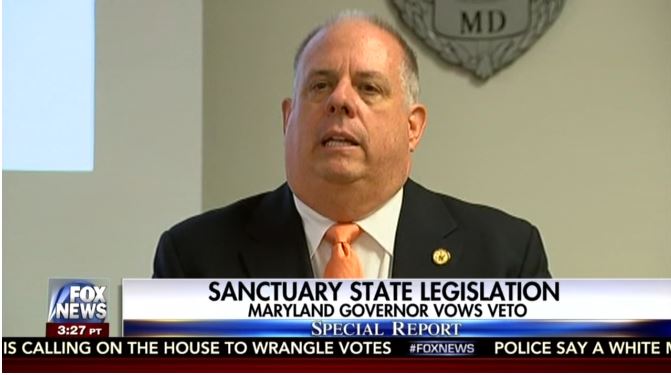 MCKELWAY: Governor Hogan is lashing out at the Montgomery County school system for its lack of cooperation with state requests for more information about the rape while voicing the same frustrations that many parents have.

HOGAN: Why is an 18-year-old man in a ninth grade class with 13 and 14-year-old girls? Why was his status not known to those folks?

MCKELWAY: And tomorrow, Governor Hogan is tentatively slated to visit an elementary school here in Montgomery County, Maryland and he will be accompanied by a woman who many believes to be the foremost threat to public education’s status quo, the Secretary of Education, Betsy DeVos.