The decision came just prior to her official departure to The Atlantic. Ioffe has since repeatedly apologized for her offensive statement and deleted the tweet in question, which can be found below: 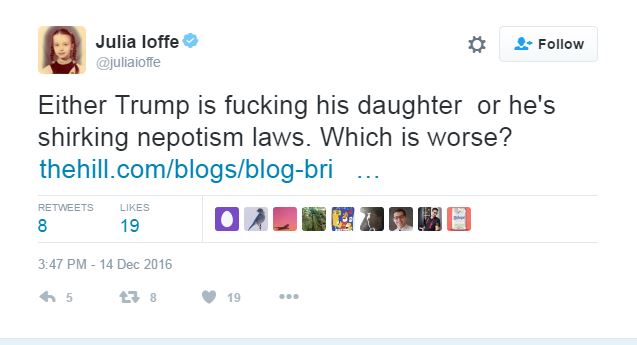 In an e-mail obtained by The Washington Post’s Erik Wemple and others, Politico Editor-in-Chief John Harris and Editor Carrie Budoff Brown wrote to staff that her “tweet this afternoon about President-elect Trump — currently and understandably racing across social media — is a clear example of the opposite of what we were talking about” concerning acceptable use of social media.

“Julia had previously announced she is taking her work to the Atlantic. We have accelerated the close of her POLITICO contributor contract, effective immediately,” Harris and Brown added before concluding that they “understand how absolutely infuriating it is to have incidents like this tarnish POLITICO.”

Ioffe seemed to have doubled down and offered only half-hearted apologies prior to her firing as she ruled in separate tweets that “[w]e have a President-elect who popularized ‘saying what everyone is thinking,’ but I guess my phrasing should have been more delicate.”

Right around the time of the Politico e-mail, Ioffe hinted that her firing was akin to what occurs under authoritarian regimes with press outlets that challenge the: 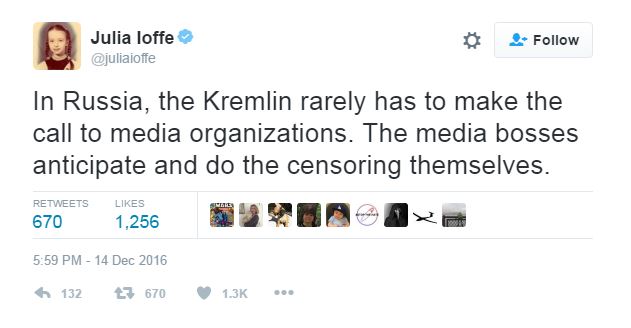 The foreign policy expert appeared to have received a cue to stop digging herself a deeper hole as she began providing more appropriate apologies that labeled her own tweet as “a crass joke”: 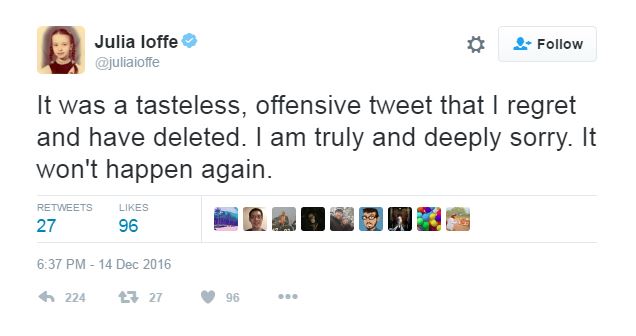 Wemple reported just after 7:00 p.m. Eastern on Twitter that The Atlantic has decided not to take any further action against Ioffe because they’re “confident” she will not stray from the magazine’s standards of conduct. Additionally, Wemple stated that The Atlantic was comfortable with Ioffe’s apologies in the hours since her incest tweet.

Going forward, it’ll be worth seeing if any of the major broadcast networks cover Ioffe’s tweet seeing as how ABC, CBS, and NBC dedicated over 14 minutes of coverage over a two day period in December 2014 to congressional staffer Elizabeth Lauten criticizing President Obama’s daughters in a post on her personal Facebook page.

As my colleague Kyle Drennen wrote at the time while comparing the Lauten coverage to that of ObamaCare architect Jonathan Gruber:

When the networks saw the opportunity to attack an unknown Republican staffer for a personal posting on social media they found the air time. In contrast, when a central Obama advisor was caught undermining the President's signature legislation, the same media outlets provided only the bare minimum of coverage and quickly moved on.