We at NewsBusters have chronicled some head-scratching promos in the last year by MSNBC but the most asinine and fawning one began airing recently featuring Democratic presidential candidate Hillary Clinton telling MSNBC host/NBC News correspondent Andrea Mitchell at a press conference that she loves her and resembles “my kind of woman” who’s “indefatigble...I’ll tell you what.”

The promo started in a fairly innocent way with a caption reading “this is how you get an answer” but the seriousness ended there when the next thing viewers saw and heard was Mitchell calling out to Clinton at a press conference.

With Clinton laughing, Mitchell blurted out: “Madame Secretary! You were quoting Matt Olson in Isareli television.”

Clinton interrupted Mitchell to laugh along and offer some hearty praise showing the coziness between some reporters and the subjects they cover (running counter to the fundamentals of journalism): “I love you Andrea. You are indefatigable. You’re my kind of woman. I’ll tell you what. Look at this.”

The line about getting answers offered at the onset of the promo would never come to fruition as Mitchell went off track and told Clinton that the two of them had to grow up “the hard way” through their careers.

Somehow, MSNBC found it perfect to conclude with two on-screen headlines and the first reading “[t]his is why you watch” followed by the MSNBC logo and “[t]his is who we are.”

Pulling back for a second, if this is who MSNBC is, it’s pretty clear that they’re not making any sort of a pivot back to the center from their tried and failed strategy of “Lean Forward” and catering to liberals both traditional and farther leftward.

The relevant portion of the transcript from the MSNBC promo that aired during The 11th Hour with Brian Williams on September 14 can be found below.

[ON-SCREEN HEADLINE: This is how you get an answer.] 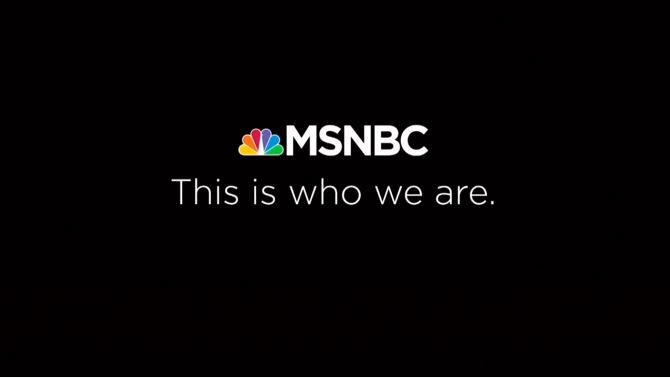 MITCHELL: You were quoting Matt Olson in Isareli television

CLINTON: I love you Andrea. You are indefatigable. You’re my kind of woman. I’ll tell you what. Look at this.

MITCHELL: Well, we had to go up the hard way.

[ON-SCREEN HEADLINE: This is why you watch. MSNBC. This is who we are.]