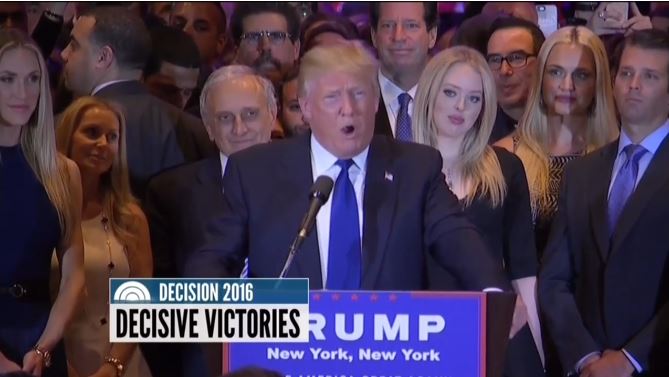 In his Politico column posted on Wednesday, National Review editor-in-chief Rich Lowry mounted a thorough trouncing of the liberal media for their universal gushing over Donald Trump’s win in the New York primary despite the fact that a landslide had long been predicted as a possibility.

“The New York primary was a game changer — for the self-generated and self-reinforcing media narrative,” Lowry began before adding that the media has painted Tuesday’s win as cementing his status as the likely GOP nominee even though the vote was one “that everyone knew he was going to win.”

Lowry didn’t deny the fact that “Trump blew the doors off the joint Tuesday, with 60 percent of the vote,” but emphasized that the final delegate haul the billionaire amassed was only a handful more than expected: “Yet his additional delegate haul over what had been realistic projections for him in New York was only five or 10 or so (Ted Cruz seemingly “rigs” that number of delegates every other Saturday afternoon).”

He further explained that the media have left on the side of the road the reality that, if Trump becomes the GOP nominee, he will be seen as far weaker than any of his predecessors (three of whom lost with the exception being George W. Bush):

A wounded and divisive front-runner is still shambling toward the nomination in the weakest condition of any leading Republican in memory, sporting the most toxic general-election numbers of any candidate in memory. This story may be so well known that it demands dramatic, overhyped momentum swings to spice it up in the media, but the basic outline is unchanged.

The lone member of the media to be called out by Lowry was none other than MSNBC’s Morning Joe co-host Joe Scarborough for celebrating Trump for being well-behaved in his Tuesday night victory speech:

It was first remarked that he was becoming more presidential when he held a post-Super Tuesday news conference at Mar-a-Lago during which he threatened the speaker of the House. MSNBC’s Joe Scarborough hailed an insanely sour-grapes Trump news release after Wisconsin as a sign of Trump’s new professionalism. (Scarborough says that he’s a John Kasich supporter — the Ohio governor should demand some tangible proof, and bring a couple of witnesses and a notary.)