Tapper began the seven-minute-long interview by mentioning Carpenter’s interview in the segment beforehand and how Trump’s social media director Dan Scavino tweeted a video supporting The National Enquirer piece even though “she says there is no truth to it all” and has “always been faithful to her husband.”

Instead of denouncing Scavino’s actions, Sanders blamed the Rubio campaign for having ginned up “the entire situation” and, in classic Trump fashion, recommended that Cruz and Carpenter sue The National Enquirer.

The CNN host interjected to call Sanders out and attempted to ask her again about Scavino’s role in trying to give the story legs:

The Trump campaign yesterday, Dan Scavino, paid by Donald Trump, the social media director for the campaign, sent out a video spreading this rumor, one that did not even mention The National Enquirer as far as I remember. Sarah, I've known you and I’ve known your family for a long time and I can't believe that either one of you would condone what Dan Scavino did yesterday[.]

When the daughter of the social conservative and former presidential candidate again deflected, Tapper simply noted:

SANDERS: I haven't seen that specific thing, so again, I don't want to speak to that[.]

Sanders attempted to turn the conversation toward who spread the rumors, but Tapper was having none of it and vented his frustration at this blatant denial and spin [emphasis mine]:

The story is apparently, according to Amanda, a smear job, no truth to it, your campaign, I'm telling you, as a factual matter, is pushing it. Your social media director tweeted out a crazy video suggesting that Amanda Carpenter, who’s married with two children, and this married senator who also has two children, that something untoward was going on. There is no actual evidence that it happened. I mean, at some point, aren't you just ashamed? This the Trump campaign sending it out.

Not surprisingly, Sanders replied that she was “ashamed” of “the entire process” not because of the tabloid smear or what he boss has said about women and minorities or the allegations about Trump campaign manager Corey Lewandowski assaulting Michelle Fields but how the Cruz campaign has been “very disingenuous” and shown to be “one of the dirtiest and nastiest campaigns out there.”

The interview moved along with Sanders proclaiming how she doesn’t “think anything happened” with Lewandowski and Fields and basing it on a seemingly random story in which she herself claimed she was tossed to the ground in a previous campaign by a cameraman.

Tapper confronted her again with the evidence and when it was clear that Sanders would not admit that Lewandowski was in the wrong, The Lead and State of the Union host ended the interview:

The relevant portions of the transcript from CNN’s The Lead with Jake Tapper on March 29 can be found below. 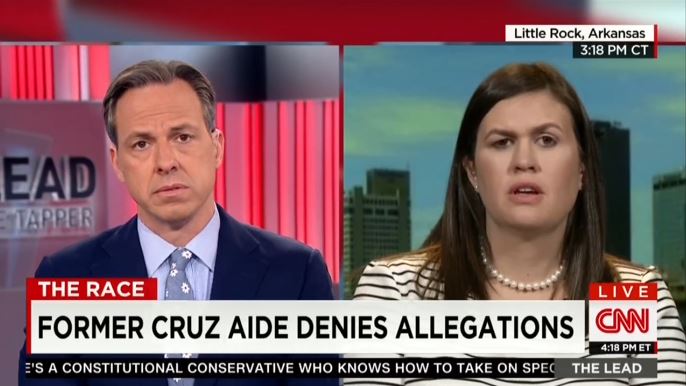 JAKE TAPPER: She's falsely accused of be the former mistress of Ted Cruz. Now, Amanda Carpenter just denied the claims on the show. Joining me to respond, senior adviser to the Trump campaign Sarah Huckabee Sanders. Sarah, thank you so much for joining us. We appreciate it. Amanda Carpenter just said minutes ago on our air that your campaign is harassing her by your social media director Dan Scavino spreading rumors that she had extramarital affair, she says there is no truth to it all. She's always been faithful to her husband. What's your response? Is it appropriate for Scavino to be sending out these videos?

SARAH HUCKABEE SANDERS: You know, I think the entire situation is really sad. I mean, this is a story that's well documented started and pushed by Rubio allies over six months ago. The Cruz campaign continues to try to pin it on Donald Trump and our campaign and it certainly did not originate there. Again, I think the whole thing is unfortunate and I think for Amanda and also for Ted Cruz, I think they should come out and sue The National Enquirer and file a suit against them and put this thing to rest and I think they should aggressively —

TAPPER: But I'm specially talking about the Trump campaign. The Trump campaign yesterday, Dan Scavino, paid by Donald Trump, the social media director for the campaign, sent out a video spreading this rumor, one that did not even mention The National Enquirer as far as I remember. Sarah, I've known you and I’ve known your family for a long time and I can't believe that either one of you would condone what Dan Scavino did yesterday

SANDERS: You know, I haven't seen the specifics of that, but again, I think — and I agree, I think the entire situation is very unfortunate will and for the sake of both Amanda and Senator Cruz's family I think that they should fight back and sue The National Enquirer on this false story.

SANDERS: I haven't seen that specific thing, so again, I don't want to speak to that 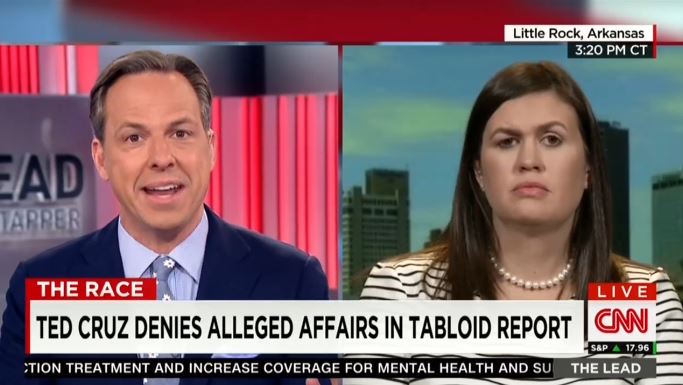 TAPPER: I mean, there's plenty of circumstantial evidence that he had connections to the people who did it, but let's leave that at the table. There's no evidence that Donald Trump planted the story. The story is apparently, according to Amanda, a smear job, no truth to it, your campaign, I'm telling you, as a factual matter, is pushing it. Your social media director tweeted out a crazy video suggesting that Amanda Carpenter, who’s married with two children, and this married senator who also has two children, that something untoward was going on. There is no actual evidence that it happened. I mean, at some point, aren't you just ashamed? This the Trump campaign sending it out.

SANDERS: Look, what I'm personally, Jake, what I'm ashamed of is the entire process that it's got tonight where it's gutter politics. I think it's very disingenuous for the Cruz campaign to act like they've done nothing wrong in the political process. They're one of the dirtiest and nastiest campaigns out there and I mean, if you don’t believe me, ask Ben Carson. Ted Cruz is one of the nastiest campaigners we've seen in the cycle. I'm not condoning any of the activities but I think we need to change the tune and pivot to what's important and to talk about what's keeping Americans up at night. That's certainly what I'm focused on. That's the reason people that have been rallying around Donald Trump from the beginning, is because those think he's the first guy in a long time that will stand up and fight for them. I think that's where we need to move back.

TAPPER:  I'd love to be talking about trade and immigration and counterterrorism but, unfortunately, I have to turn to another question, which has to do with the fact that your campaign manager, Corey Lewandowski, now faces legal charges. There's surveillance video showing Mr. Lewandowski did grab the arm of Michelle Fields. Donald Trump said there's nothing there, but when you watch that tape, do you see nothing?

SANDERS: I do. Jake, I mean I've stood next to you in the middle of press scrums and spin rooms and you know the back and forth that takes place. I really don't see anything. I've watched the video and frankly, I encourage everybody else to watch the video because I don't see anything there. I see a candidate exiting the room. I see her grabbing him. I mean, and he said it earlier but I don't necessarily disagree. Maybe he should be filing suit against her for aggressively touching him. I've been pushed, I’ve kicked, I’ve elbowed, many times business reporters. And I certainly my instinct isn't to turn around and file a battery charge against them. I mean, I think this being blown completely out of proportion. I really don't see anything and I really — I encourage everybody to take 30 seconds, watch the video, and I don't think you'll see anything there.

TAPPER: Okay — you don't see anything there. The police obviously say differently. In the police report, it says that Michelle Fields someone yank her left arm, she fell back but caught herself from falling. Fields showed me her left forearm which revealed bruising from what appeared to be several finger marks indicating a grabbing-type injury. Even if you don't think it's a big deal, it did happen and both Corey Lewandowski and Donald Trump initially said that she made it up and that he never touched her. Those are not true statements.

SANDERS: My point is I couldn't tell you what the man's face looked like. I've been in many of those situations you encounter in the presidential campaign on a daily basis, thousands of people, lots of interactions with reporters. I can tell you. Watch the video. There's no malice, there's no specific intent here other than to move the candidate out of the room. I don't see that he ever made eye contact with her and recognized her or anything like that. He could have brushed past her and never known that it's happened. Again, you've been in this. I've been in the mix where there's kind of that constant pushing, shoving, all of the reporters are trying to get the story —

TAPPER: Beyond the pull, Sarah — 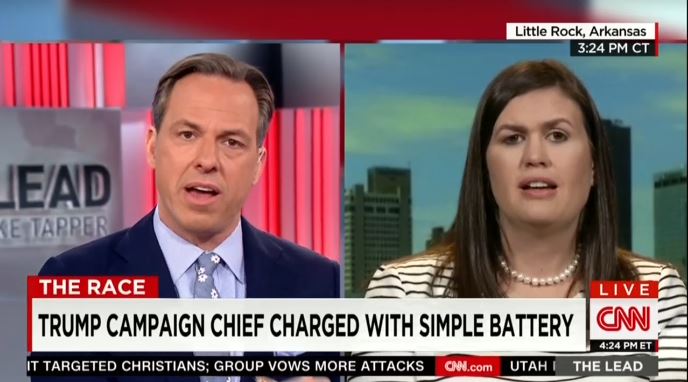 TAPPER: But I'm not talking about grabbing. I'm talking about the lying about it. It happened. It did happen. It seems to me like this could have been avoided if Corey had initially just said sorry but it did happen, so forgetting whether or not you take the grabbing seriously, it did happen we see it on tape and there's just this denial that it happened and smearing of her.

SANDERS: I sure hope so. Thanks Jake.