Allen gushed of the “unique” look “behind the scenes” that Souza has in capturing “close-up images of a President many never have seen publicly until now” whether it’s “[s]erious matters inside the White House” or Obama holding “an aide's twin sons, Mom wiping a tear.”

Allen explained that Souza’s “mission” is “to document history,” including “President Obama and the First Family greeting Pope Francis, a handshake with Cuba's Castro, a big smile after the Iran nuclear deal, [and] Mr. President there for Vice President Biden at his son's funeral.”

Jones returned after Allen’s taped report ended to tout Souza’s top three Instagram posts of the year with number two being the White House lit up in rainbow colors after the gay marriage ruling from the Supreme Court on June 26.

Co-host Savannah Guthrie and fill-in co-host Craig Mevlin spent the time remaining fawning over how “amazing” and “fantastic” of a “job Pete Souza does” in capturing the President at nearly every turn.

Over on CBS This Morning, fill-in co-host and WCBS anchor Kristine Johnson devoted an extended, 53-second brief to photos of the President “walking through the Rose Garden in April on his way to sign a bill into law” and a three-picture sequence that “show[ed] the President as an aide interrupts a brief to tell him the Supreme Court upheld ObamaCare” with his reaction. 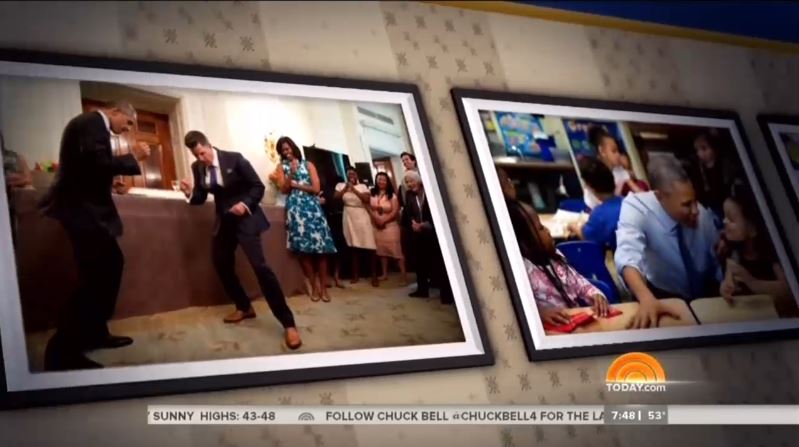 RON ALLEN: They are unique behind the scenes, close-up images of a President. Many never have seen publicly until now. Serious matters inside the White House. A First Daughter drops by the Oval Office to see her dad. The President with a aide's twin sons, Mom wiping a tear. The year end gallery of White House photographer Pete Souza, there with Mr. Obama day in and day out from the start, giving NBC News an exclusive first look.

PETE SOUZA: I probably take between 500 and 2,000 a day, probably about a quarter million a year, somewhere in that —

ALLEN [TO SOUZA]: Over seven years. So, we're talking —

SOUZA: Over seven years, so we’re talking — yeah, a lot of pictures.

ALLEN: Part of his mission? To document history. President Obama and the First Family greeting Pope Francis, a handshake with Cuba's Castro, a big smile after the Iran nuclear deal, Mr. President there for Vice President Biden at his son's funeral.

SOUZA: He is the President of the United States, but he's also a human being. I try to show his personality as best I can. There's obviously a lot of pictures with little kids in my year end gallery. He loves babies.

ALLEN: That's Deputy National Security Adviser Ben Rhodes daughter Ella before the party. [TO SOUZA] Have you ever seen a President lying on the floor in the Oval Office before with a kid in an elephant suit?

SOUZA: And a lot of them are children of working moms, and he knows what a sacrifice they make, in terms of, you know, being at work a lot.

SOUZA: It'll hopefully be the one I make later today or tomorrow. That's what keeps you going. You're trying to get a good picture tomorrow.

ALLEN: Ron Allen, NBC News, with the President in Honolulu.

JONES: 2,000 pictures a day. Pete Souza is active on Instagram, giving a behind the scenes look of the White House all throughout the year. His third-most liked photo of 2015 was of the President with a baby in a mini Pope mobile. Look at this one, number two, was the White House lit up in the colors of the rainbow to celebrate the ruling on same-sex marriage and his most liked Instagram of the year? The president with Ella in the Oval Office. You can certainly vote for your favorite from the White House Year in Photos at today.com. Guys, 2,000 photos a day?

MELVING: What a fantastic job Pete Souza does.

GUTHRIE: It's amazing. He's so professional. He comes in, takes the picture real quick and is out. Can you imagine the stories he has to tell, not that he'd tell them, but you know, he's seen it all. It’s the best. Thank you, Sheinelle.