Following the Wednesday morning newscasts in which ABC, CBS, and NBC praised the “outraged” President Obama for “slamming” Republican wanting to restrict Syrian refugees in light of the Paris terror attacks, the “big three” were back on the case Wednesday night in spinning for the President.

However, the CBS Evening News and NBC Nightly News did make time to include in their reporting that numerous polls now show that a majority of Americans stand firmly against the President and side with Republicans in wanting to put a moratorium on refugees for the time being.

Of course, that leaves ABC’s World News Tonight in ignoring this angle as it continued to boost the President.

NBC Nightly News anchor Lester Holt turned to the debate over the refugees by revealing a key result from the latest online poll NBC News conducted with the survey site SurveyMonkey:

Now to the growing war of words over allowing Syrian refugees safe haven in the U.S. amid new concerns terrorists could sneak in among them, pretending to be refugees themselves. A new NBC News/Surveymonkey online poll finds 56 percent Americans disapprove of allowing more refugees into the country, while 41 percent approve and the issue divides sharply across party lines[.]

Despite the polling data, correspondent Hallie Jackson declared right off the top of her segment that the President “mock[ed] Republicans” while in the Philippines and “aim[ed] a withering attack at those who want to close U.S. borders to Syrian refugees.”

Jackson added between Obama soundbites that the President named “[n]o names” but it was not a surprise to anyone who he was referring to in “[s]ome Republican candidates proposing to keep out Syrian Muslims will — but letting in Christian refugees” with “[t]he President accusing them of rhetoric that plays into terrorists’ hands.”

In a bizarre twist, she took a few moments to attack Ben Carson following a New York Times piece concerning his need to brush up on foreign policy.

Jackson hyped that Carson is “now on a media blitz to try to prove his foreign policy chops after a New York Times report suggests Carson's own advisers think he’s struggling...and while that is fine with supporters who like his political inexperience, others see warning signs.”

On CBS, foreign affairs correspondent Margaret Brennan presented the President’s case (that runs counter to the American people) before turning over to chief White House correspondent Major Garrett, who focused on how Republicans responding to President as well as the polling that’s in their favor: “A new [Bloomberg] poll shows more than half Americans want the U.S. to stop admitting Syrian refugees. It’s a sentiment echoed by most of the Republican presidential field, including Marco Rubio and John Kasich.”

In contrast to even footnoting the polls, ABC’s World News Tonight chided Republicans for their “refugee rejection” with anchor David Muir fretting that “[a]t least 31 governors saying refugees are not welcome in their states, more than half the country now.”

Despite CBS and NBC mentioning the polls, they were joined by ABC in failing to highlight how the President is arguably a hypocrite on whether or not Syrian refugees should be admitted.

As Sean Davis of The Federalist keenly observed, this same President who’s accused Republicans of having rhetoric that serves as “potent recruitment tool for ISIL” actually halted the flow of “Iraq refugee requests for six months” in 2011 “after the Federal Bureau of Investigation uncovered evidence that several dozen terrorists from Iraq had infiltrated the United States via the refugee program.”

The transcript of the segment from ABC’s World News Tonight with David Muir on November 18 can be found below. 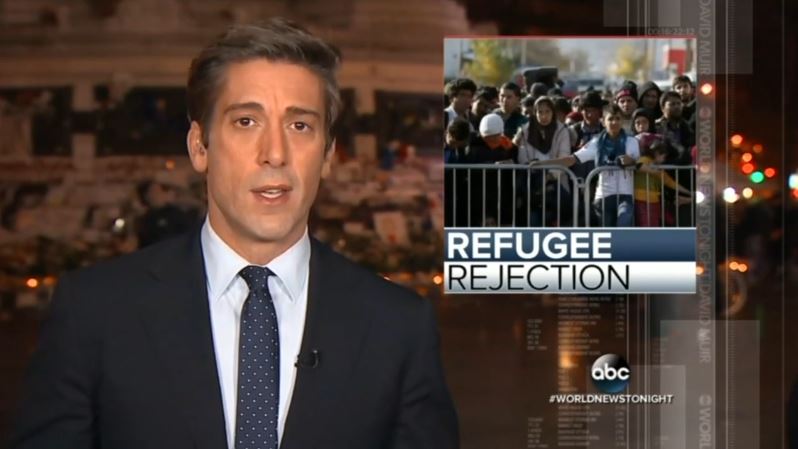 DAVID MUIR: Now, to the debate back at home over whether to welcome refugees to the U.S. At least 31 governors saying refugees are not welcome in their states, more than half the country now and this evening, House Speaker Paul Ryan calling for a security test instead of a religious test, doubling down on the need to pause the President's plan to admit 10,000 refugees in the U.S., saying America can be compassionate, but we should also be safe. ABC's chief White House correspondent Jonathan Karl.

JONATHAN KARL: In a bid to strike middle ground on an explosive issue, Speaker of the House Paul Ryan said today he doesn't want to end the Syrian refugee program, but only pause it long enough to ensure no terrorists use it to enter the United States.

HOUSE SPEAKER PAUL RYAN: People understand the plight of those fleeing the Middle East, but they also want basic assurances for the safety of this country.

KARL: But Ryan is outright rejecting calls by some Republicans to only let in Christian refugees.

RYAN: We will not have a religious test, only a security test.

KARL: The White House said tonight the President would veto Ryan's bill. Traveling in Asia, Obama vowed to move ahead with his plan to bring in 10,000 Syrian refugees over the coming year, accusing Republican opponents of fear-mongering.

PRESIDENT BARACK OBAMA: They've been playing on fear in order to try to score political points or to advance their campaigns and it's irresponsible and it's contrary to who we are and it needs to stop, because the world is watching.

REPUBLICAN SENATOR TED CRUZ (Tex.): I would encourage you, Mr. President, come back and insult me to my face.

KARL: The White House insisted again tonight that every refugee goes through intensive security screening before coming to the United States, and pointed out that of the more than 2,000 Syrian refugees that have come to the U.S. since 2001, not one of them has been tied to terrorism. David?

MUIR: Jon Karl at the White House for us tonight. Jon, thank you.