Democratic presidential candidate Hillary Clinton’s first national TV interview aired during Tuesday’s edition of The Situation Room on CNN and while senior political correspondent Brianna Keilar pressed Clinton on her e-mail scandal and tumbling poll numbers, the interview measured up to little more than a stroll in the park.

Along with gooey questions about which woman she thinks should go on the $10 bill and who plays a better Hillary Clinton on Saturday Night Live, Keilar came at Clinton from the left on the candidacy of socialist Bernie Sanders and allowed the former Secretary of State to pontificate without interruption for over a minute and a half on the work of the scandal-ridden Clinton Foundation.

When it came time part of the way through the interview to ask about the Clinton Foundation scandal, Keilar was only able to muster up this sole question before letting Clinton rant without following up about the foundation and how “my husband knows so many people in the world”:

There has been a lot of controversy surrounding your family's foundation, the Clinton Foundation, corporate and foreign donations that have gone to the foundation and the work that it does. Has it made you think seeing this controversy that has come about, has it made you think about if you are president, what will happen to the Clinton Foundation? Have you thought about perhaps shutting it down?

Keilar also provided Clinton a broad platform to blast the Republican presidential field on their views regarding illegal immigration and being embodied by that of candidate Donald Trump. Regarding Trump, Keilar served up this softball:

Donald Trump is also creating quite a lot of commotion on the other side. He's a friend of yours, has been over the years, he donated to your Senate campaign, to the Clinton Foundation. What's your reaction to his recent comments that some Mexican immigrants are rapists and criminals?

Near the interview’s conclusion, Keilar asked the former First Lady for her thoughts on “[w]hat’s changed when it comes to you approach to the media” in Tuesday’s interview being only her first with a national TV outlet and the now-infamous “rope incident this weekend in New Hampshire.”

With the final two questions, Keilar teed up favorable ones regarding the $10 bill and Saturday Night Live:

Have you given any thought to the woman who should be on the $10 bill?

Who's the better Hillary Clinton? Kate McKinnon or Amy Poehler?

Earlier, Keilar led off the interview with a number of questions about Sanders with the first being why she thinks “a self-described Democratic socialist is really attracting this organic interest that your campaign seems to be struggling a little bit with.”

She then continued pressing Clinton from the left on whether she would follow the lead of Sanders in placing “on the table” his calls for the raising of taxes “on big corporations” and “wealthy Americans.”

Unlike her questioning of Clinton regarding the foundation, Keilar had multiple follow-ups concerning her e-mails and even got Clinton to snap back that she was “starting with so many assumptions” that supposedly haven’t been substantiated.

On her poll numbers, Keilar asked if she “undersand[s] why” voters don’t trust her, if she “bear[s] any responsibility” for tumbling poll numbers, and if she would “vote for someone you don’t trust.”

Following the airing of the interview, it was only then that Keilar had some harsh words for Clinton as she admitted that she “didn't hear a more open or transparent Hillary Clinton” that wouldn’t even answer questions about a competitor in Sanders. In addition, Keilar observed that Clinton took “no responsibility for what we have seen has been eroding – eroding opinion of her as trustworthy and honest.”

In marked contrast to her interview with Clinton, Keilar badgered Republican presidential candidate Ben Carson on June 11 over gay marriage and LGBT issues and specifically whether those people “face discrimination” in today’s America.

The relevant portions of the transcript from CNN’s The Situation Room on July 17 can be found below. 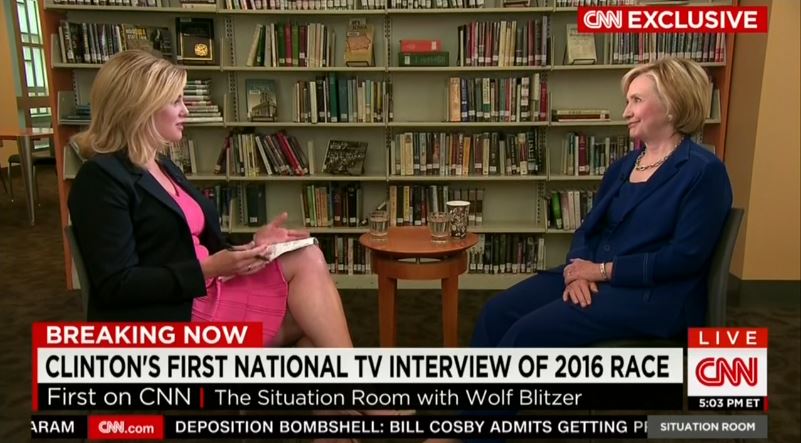 BRIANNA KEILAR: Secretary Clinton, thank you so much for talking to us today. You're here in Iowa for a couple events. You're the front-runner in this state, but we're also seeing Bernie Sanders attract a lot of attention. He has had big crowds here, 10,000 people in Wisconsin last week, 7,500 people in Maine last night. Why is it do you think that someone who is a self-described Democratic socialist is really attracting this organic interest that your campaign seems to be struggling a little bit with?

KEILAR: Senator Sanders has talked about how, if he's president, he would raise taxes. In fact, he said to CNN's Jake Tapper he would raise them substantially higher than they are today on big corporations, on wealthy Americans. Would you?

KEILAR: Are – is raising taxes on the table?

KEILAR: I'm wondering if you can address a vulnerability that we've seen you dealing with recently. We see in our recent poll, the nearly 6 in 10 Americans say they don't believe that you're honest and trustworthy. Do you understand why they feel that way?

HILLARY CLINTON: Well, I think when you are subjected to the kind of constant barrage of attacks that are largely fomented by and coming from the right and –

KEILAR: But do you bear any responsibility for that?

KEILAR: Trusting someone to fight for them and trusting someone, these are two different things. Do you see any role that you've had in this sentiment that we've seen where people are questioning whether you're trustworthy?

KEILAR: Would you vote for someone you don't trust?

KEILAR: One of the issues that has eroded some trust that we've seen is the issue of your e-mail practices, while you were secretary of state. I think there's a lot of people who don't understand what your thought process was on that. Can you tell me the story of how you decided to delete 33,000 e-mails and how that deletion was executed?

KEILAR: But you said that they did the same thing, that they used a personal server and –

KEILAR: – while facing a subpoena, deleted e-mails from them?

KEILAR: I know you say you were permitted. I just am trying to understand some of the thought process behind it. One former state attorney general, a Democrat, told CNN that they know of no lawyer who would advise someone – a client facing the kind of absolutely you've been facing to wipe their server. What do you say to that?

KEILAR: There has been a lot of controversy surrounding your family's foundation, the Clinton Foundation, corporate and foreign donations that have gone to the foundation and the work that it does. Has it made you think seeing this controversy that has come about, has it made you think about if you are president, what will happen to the Clinton Foundation? Have you thought about perhaps shutting it down? 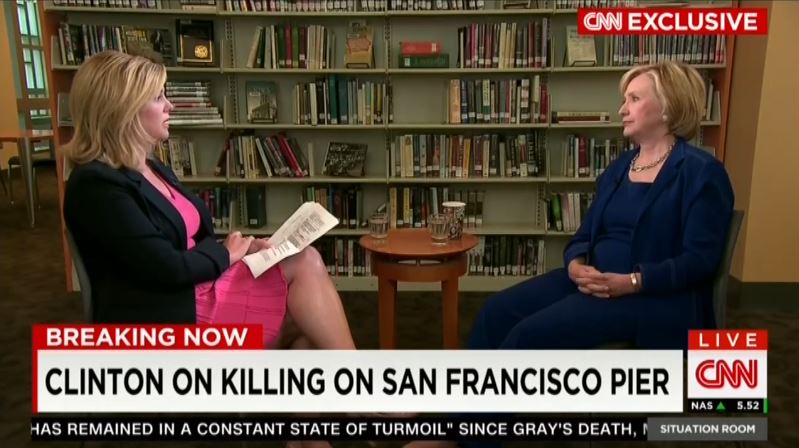 KEILAR: Last week, an undocumented immigrant who had been deported five times killed a 32-year-old, Kate Steinle in San Francisco, sanctuary city where local law enforcement does not enforce federal immigration laws. When you last ran for president, you supported sanctuary cities. In light of this terrible incident, does that change anything about your view on this?