A Monday New York Times editorial compared transgender access to restrooms to the civil rights-era struggles against Jim Crow laws as well as women’s rights and Americans with disabilities. The Times argued that banning transgender students from bathrooms that do not align with their sex at birth “reinforce[s] cruel policies that deny dignity to some of the most vulnerable students and subject them to more bullying and stigmatization.”

The paper implied that transgender access to bathrooms is a civil rights issue, stating: “Access to public restrooms has been a divisive issue in past civil rights struggles.” They continued with this comparison: “African-Americans challenged Jim Crow laws that barred them from 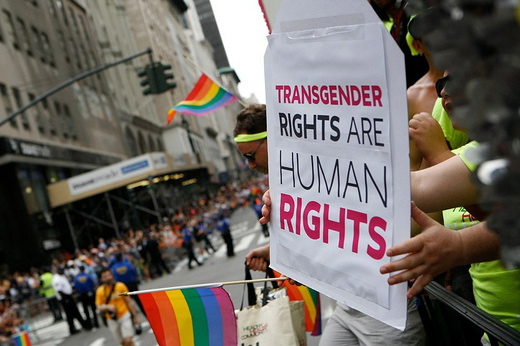 so-called white restrooms.” The editorial also mentioned how women – as they increasingly entered the labor force in the 1960s and 1970s – “had to fight” to get employers to provide restroom facilities.

The Times then compared the issue to Americans with disabilities who sought access to public accommodations in the 1980s. The Times noted: “[W]hen advocates for Americans with disabilities began getting traction in their quest for equal access to public accommodations, many questioned the cost and burden of building special restroom facilities.” The editorial board then tied this with the transgender rights struggle, insinuating that bathroom access for them is the next frontier:

It may seem inconceivable today that people on the forefront of those struggles were dismissed, mocked and shunned for years. Yet each was a hard-fought victory.

The liberal paper dismissed concerns about transgenders using bathrooms that do not align with their sex as “alarmist.” The editorial seemed to reject worries about sexual assault that could arise as a result of more liberal restroom policies.

At the end of the piece – if The Times had not made their position clear already – the editorial came out in favor of nationwide guidelines for schools and universities regarding transgender students:

In the meantime, the Department of Education, which has supported transgender students in individual lawsuits, should issue detailed across-the-board guidelines to all schools and universities. By doing so, it would help students in hostile communities who are having to wage humiliating fights for a basic right.

The New York Times’s editorial stance on LGBT issues like this one does not exactly come as much of a surprise. However, it’s extreme to compare laws that an individual should use the bathroom of the sex he or she was born with – and still is – to the denial of public accommodations to African-Americans.