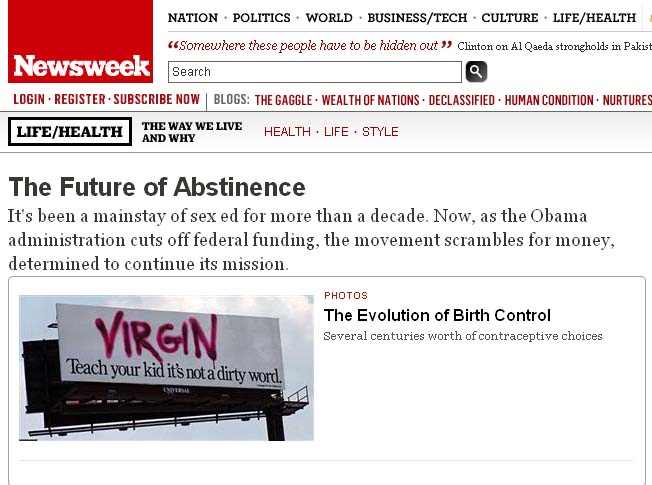 An Oct. 28 Newsweek article made another attempt to discredit sex ed that teaches teens to wait for sexual activity until marriage. The abstinence movement already faces dire straights since President Obama cut its federal funding from the 2010 budget. Newsweek must be hoping to bury it.

Despite a September vote by the Senate Finance Committee that could restore the funding, Newsweek reporter Sarah Kilff maintained that the federal government has wasted money on abstinence education because the programs are ineffective.

Kliff noted that $1.5 billion of the funding for abstinence education programs came from the federal government and reported, "As funding grew, so did a body of research showing that abstinence didn't change the sexual behaviors of students; pregnancy and STD rates did not go down, the age of initial activity did not go up."

But Kliff ignored the fact that the federal government spent $12 on comprehensive sex education programs for every $1 it spent on abstinence programs.

Kliff cited a 2007 study that found students who received abstinence education were "no more likely to abstain than those in a comprehensive program." But the study, which focused on four different abstinence programs, was largely disputed at the time of its release.

CMI reported in April 2007 that the multi-year study, conducted by Mathematica Policy Research, Inc., contained a flawed research design and that the programs studied were not representative of the 700 programs in use around the country. Abstinence curricula have evolved since the beginning of the study period. Additionally, the study did not examine curricula directed at high school students. As CMI previously noted, high school is when students have to deal with the onslaught of maturing hormones, increased peer pressure to have sex, and an intense deluge of pro-sex media messages from television, music and movies.

Dr. John Santelli, the department chair and a professor of clinical population and family health at Columbia University's Mailman School of Public Health, told Kliff in regard to abstinence education research, "Each evaluation came along, and each showed that it didn't work." The fact that Santelli is also a senior fellow at the Guttmacher Institute, the research arm of Planned Parenthood, was not noted in Kliff's article.

Santelli and Kliff both overlooked research that proved abstinence education does work. Instead, they cited a 2008 study saying that out of 48 comprehensive curriculums, "two-thirds either reduced frequency of sex or number of sexual partners."

Among the research Kliff ignored is a June 2007 study by the Salt Lake City-based Institute for Research and Evaluation that found the best federally funded abstinence programs "can reduce teen sexual activity by as much as one-half."

Rather than focus on the good abstinence programs, Kliff pushed the idea that a "major factor" in the ineffectiveness of that curriculum "was the incomplete information it provided about contraceptives and their use." She cited extreme examples from a 2009 study by the Texas Freedom Network of Education Fund, a group "that advances a mainstream agenda of religious freedom and individual liberties to counter the religious right," to prove her point.

"The Texas report, which collected data from over 96 percent of the state's school districts, found one curriculum teaching that condoms have ‘little to no benefit,'" reported Kliff. She provided a second example from a lesson taught in the Baird Independent School District that stated, "A young person who becomes sexually active at or before age 14 will contract an STD before graduating from high school. This is no longer the exception but the rule."

Kliff reported "experts on both side of the issue expect the abstinence industry to shrink significantly," even if Congress did continue to fund such programs. She cited the instance of an Illinois school district that switched to a comprehensive sex ed curriculum for its middle school in 2007 after a funding cut would have forced the district to pay for the abstinence programs it was using. Kathy Sanders, the district's director of research, testing and evaluation told Kliff, "We felt like we didn't want to fund [abstinence], since it wasn't giving all the information." According to Kliff, the district is now considering switching its high school sex ed to a comprehensive curriculum.

Scott Phelps, director of the A&M Partnership, an Illinois-based abstinence-only education organization, provided the only insight as to the other lessons contained in curriculum like his. "Our program indicates that sex is more than physical. It's emotional. There's a lot of different aspects," he told Kliff. "If I'm teaching all of that, and then I'm teaching contraception, what is contraception going to do for all those consequences? It would be sort of nonsensical."