New York Times Sneers 'No, Biden Is Not Trying to Ban Gas Stoves' (But Maybe He Should?) 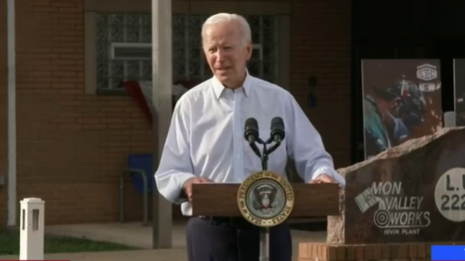 Thursday’s dismissive story by Elena Shao and Lisa Friedman appeared under the dismissive print-edition headline: “No, Biden Is Not Trying to Ban Gas Stoves.”

Those silly people must have believed US Consumer Product Safety Commission agency head Richard Trumka when he stated (as quoted in the Times itself!) that gas stoves were a “hidden hazard” and that “Products that can’t be made safe can be banned.”

But the Times soon betrayed its own mocking spin with follow-up stories suggesting Biden should be banning gas stoves, despite the actual study (a meta-study sponsored by the Rocky Mountain Institute, which wants everything electrified).

Concerns raised by the nation’s top consumer watchdog about the health hazards posed by gas stoves have triggered a sharp rebuke from the oil and gas industry and its Republican allies, inserting a common kitchen appliance into the middle of partisan politics.

Many average people and expert chefs also prefer gas stoves to electric, not just oil lobbyists and Republicans in D.C.

Critics were pushing back hard on Wednesday against recent comments made by Richard Trumka Jr., a commissioner of the United States Consumer Product Safety Commission, that his agency might take some regulatory action in the face of growing research that links gas stoves to pollutants that harm both human health and the environment.

Trumka didn’t say “some regulatory action,” but floated a ban, as the Times itself quoted in the next paragraph:

“This is a hidden hazard,” Mr. Trumka said in an interview with Bloomberg on Monday. “Any option is on the table. Products that can’t be made safe can be banned.”

Those words were echoing around a Wednesday breakfast meeting of the American Petroleum Institute, where the oil and gas industry and its supporters in Congress had gathered to discuss the upcoming legislative agenda.

Mr. Trumka had tried to quell the firestorm on Monday. “To be clear, C.P.S.C. isn’t coming for anyone’s gas stoves,” he wrote on Twitter, adding that any regulations would apply to new products.

But Republicans remained outraged, with Ms. McMorris Rodgers promising to scrutinize the Consumer Product Safety Commission. “We will do oversight,” she said, adding that she questioned some of the newest research linking gas stoves to asthma.

The Times took the study’s thin claims as truth.

A study published in December estimated that gas-burning stoves are responsible for 12.7 percent of childhood asthma in the United States…

The Times soon turned its skepticism around, with reporter Christine Chung’s story posted on Saturday, “What to Know About Gas Stove Alternatives.” A column by Farhad Manjoo (at least not as hysterical as the headline): “Your Gas Stove May Be Killing You. How Much Should You Worry?” The paper also ran a piece in May 2019 warning “Your Gas Stove Is Bad for You and the Planet.”

To coin a phrase: No, it’s not crazy to think the left wants to ban gas stoves.