New York Times media reporter Michael Grynbaum pouted about Florida’s governor and potential Republican presidential candidate thumbing his nose at the “national nonpartisan” (!) media, in “Can Ron DeSantis Avoid Meeting the Press?” on Wednesday. None of these people have the faintest idea that skipping a beating from the national press endears you to GOP voters.

Grynbaum sympathized with a poor young ABC News reporter who couldn’t get a DeSantis interview, and actually forwarded praise of Trump to make DeSantis (the new threat to Democrats and their press allies) look bad:

So on election night, Mr. Cohen decamped to a friendlier environment for the news media: Mar-a-Lago, where former President Donald J. Trump greeted reporters by name. “He came up to us, asked how the sandwiches were and took 20 questions,” Mr. Cohen recalled.

Mr. Trump, who heckled the “fake news” in his speech that evening, elevated media-bashing into a high art for Republicans. But ahead of the next presidential race, potential candidates like Mr. DeSantis are taking a more radical approach: not just attacking nonpartisan news outlets, but ignoring them altogether.

Although he courted right-wing podcasters and conservative Fox News hosts, Mr. DeSantis did not grant an extensive interview to a national nonpartisan news organization during his 2022 re-election bid -- and he coasted to victory, with Rupert Murdoch’s media empire now promoting him as a 2024 contender. 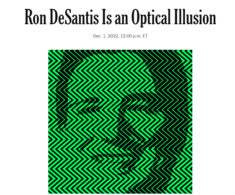 New York Times, please define “national nonpartisan news organization.” They can't be talking about themselves, since they have published the notion that he's an "optical illusion."

Surely they don’t mean CNN and MSNBC, which are partisan in favor of liberal Democrats. Grynbaum found it ominous that DeSantis wasn’t giving the liberal press a target for their typical abuse of any Republican threatening to run for president.

His success is an ominous sign for the usual rules of engagement between politicians and the press as another nationwide election looms….

Grynbaum is pretending the “rules of engagement” with the press are the same for Democrats and Republicans. He continued to offer backhanded praise to Trump as “an enthusiastic participant in the “boys on the bus” tradition of campaign reporting that dates back decades.”

He misled in his attack on former DeSantis press secretary Christina Pushaw, who sparred very effectively with the press on social media, by pretending that a piece of urban slang Pushaw slung online was somehow dangerous.

A top DeSantis communications aide, Christina Pushaw, has articulated the governor’s view of the news media in harsh terms….

In 2021, Ms. Pushaw’s Twitter account was suspended after she criticized a report by The Associated Press and urged her followers to “drag them.” Ms. Pushaw, then serving as the governor’s press secretary, wrote that she would put the A.P. reporter “on blast” if he did not modify the story; the reporter later received online threats.

The A.P. complained about “a direct effort to activate an online mob to attack a journalist for doing his job.” Ms. Pushaw responded that “drag them” was a slang term and did not amount to inciting a violent threat.

“Drag them” is in fact a slang term.

The incident prompted an outcry. “As someone who believes in the role of press in an open society, I found it unbelievable, not only what she was allowed to do, but encouraged to do,” said Barbara Petersen, a longtime First Amendment advocate who runs the Florida Center for Government Accountability….

Because how dare a Republican be allowed to push back against obviously slanted media coverage.