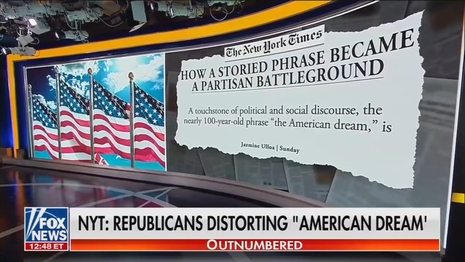 A frankly weird 1,800-word Sunday front-page New York Times story was uncorked by national politics reporter Jazmine Ulloa with “In U.S. Politics, Even the Phrase ‘The American Dream’ Divides,” which strained to make the Republican Party’s campaign treatment of the concept of “The American Dream” seem sinister and negative.

Ulloa’s piece got off to a promising start by introducing us to Juan Ciscomani, “a Republican who washed cars to help his Mexican immigrant father pay the bills and is now running for Congress in Arizona, has been leaning on a simple three-word phrase throughout his campaign -- ‘the American dream.’….For decades, politicians have used the phrase “the American dream” to describe a promise of economic opportunity and upward mobility, of prosperity through hard work….”

Then came the puzzling twist: Republican campaigns today have actually twisted the “American Dream” idea for cynical, nationalistic purposes, or something.

It’s frankly unclear, save for the underlying message of Don’t Trust the GOP:

Now, a new crop of Republican candidates and elected officials are using the phrase in a different way, invoking the same promise but arguing in speeches, ads and mailings that the American dream is dying or in danger, threatened by what they see as rampant crime, unchecked illegal immigration, burdensome government regulations and liberal social policies. Many of these Republicans are people of color -- including immigrants and the children of immigrants, for whom the phrase first popularized in 1931 has a deep resonance.

Of course, Democrats warning of this or that is taken as gospel while, in contrst, the GOP warning the American Dream is in danger is considered a sinister perversion:

To politicians of old, “the American dream” was a supremely optimistic rhetorical device, albeit one that often obscured the economic and racial barriers that made achieving it impossible for many. To the Republican candidates embracing it today, the phrase has taken on an ominous and more pessimistic tone, echoing the party’s leader, former President Donald J. Trump, who said in 2015 that “the American dream is dead.”

Politicians have long warned that the American dream was slipping away, a note struck from time to time by former President Barack Obama, former President Bill Clinton and other Democrats. What has changed is that some Republicans now cast the situation more starkly, using the dream-is-in-danger rhetoric as a widespread line of attack, arguing that Democrats have turned patriotism itself into something contentious.

Patriotism indeed becomes "contentious" when liberal activists dump historical statues into the river and fight to take the names of Founding Fathers off of school buildings (while keeping those same schools shuttered).

The Republican Party was even accused of using the “American Dream” as a presumably racist “dog whistle” thanks to friendly quotes from a frequent MSNBC guest (who most infamously said this):

The Republicans relying on the phrase show the extent to which the party is diversifying its ranks and recruiting candidates with powerful come-from-behind stories. But historians and other scholars warn that some Republicans are distorting a defining American idea and turning it into an exclusionary political message.

“The Republican Party is using it as a dog whistle,” said Christina Greer, an associate professor of political science at Fordham University. “They are saying here is the potential of what you can have, if we can exclude others from ‘stealing it’ from you.”

Republicans dispute that their references to “the American dream” promote exclusion and say they are using the phrase the same way politicians have used it for decades -- to signal hope and opportunity….