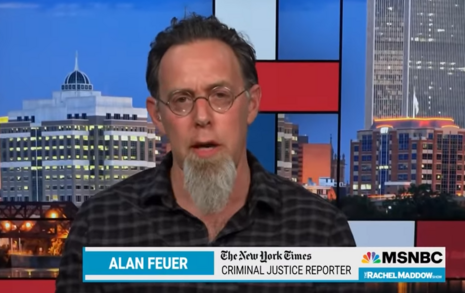 One co-lead story in Sunday’s New York Times regarding the aftermath of the FBI raid on Donald Trump’s Mar-a-Lago residency screamed “As Right-Wing Rhetoric Escalates, So Do Threats and Violence.” According to reporter Alan Feuer, this violence is taking place almost exclusively on the right, the actual fact of violence by Black Lives Matter riots and ANTIFA notwithstanding.

The story was keyed to the attack on an FBI office by an armed Trump supporter.

The armed attack this week on an F.B.I. office in Ohio by a supporter of former President Donald J. Trump who was enraged by the bureau’s search of Mr. Trump’s private residence in Florida was one of the most disturbing episodes of right-wing political violence in recent months.

But it was hardly the only one.

In the year and a half since a pro-Trump mob stormed the Capitol, threats of political violence and actual attacks have become a steady reality of American life, affecting school board officials, election workers, flight attendants, librarians and even members of Congress, often with few headlines and little reaction from politicians.

While this welter of events may feel disparate, occurring at different times and places and to different types of people, scholars who study political violence point to a common thread: the heightened use of bellicose, dehumanizing and apocalyptic language, particularly by prominent figures in right-wing politics and media.

Note that the following paragraph appeared in the same paper that ran an opinion piece in 2019 calling for the doxxing of border agents:

Despite that threat, one day later, when the right-wing media outlet Breitbart News published the warrant underlying the Mar-a-Lago search, it did not redact the names of the F.B.I. agents on the document. Almost immediately afterward, posts on a pro-Trump chat board referred to them as “traitors.”

Feuer at least nodded toward reality.

There have also been some high-profile recent criminal cases involving political violence by left-leaning defendants, including one filed against a California man who was charged with attempted murder for showing up armed with a pistol, a knife and other weapons near the Maryland home of Justice Brett M. Kavanaugh in June.

He still felt the need to deliver pro-Democratic damage control.

Republicans have often criticized Democrats for paying scant attention to the Kavanaugh incident, and for only caring about aggression when it comes from the right. Some have pointed to a string of episodes -- not all related to political violence -- that reach back to 2017.

The above is a bizarrely elliptical way not to mention the June 2017 attempted assassination of Republican congressmen on a baseball field by a Bernie Sanders supporter.

The Times has a low bar when it comes to seeing threats from conservatives.

Experts note that rhetoric does not have to directly reference violence to contribute to threats. Dehumanizing language also plays a role.

They point to efforts to label immigrants as invaders and people who support teaching about transgender and gay rights as “groomers.”….

Feuer has a long-standing blind spot regarding conspiracy theories, seeing danger solely on the right. He remained closed-minded about the mysterious figure of Ray Epps and his role in the Capitol Hill riots, slamming accusations of Epps being a federal informant. Epps was captured on video encouraging people to go into the Capitol building the night before President Trump’s infamous speech.

Feuer doesn’t find all conspiracy theories dangerous. In June 2006, a convention of Truthers who considered the 9-11 terrorist attacks an inside job by the Bush administration received a respectful hearing from him.