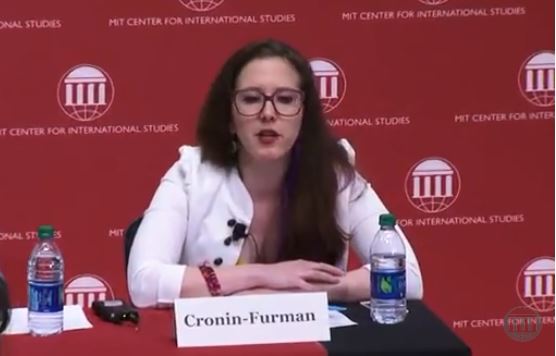 Kate Cronin-Furman, an assistant professor of human rights at University College London, advocated doxxing -- revealing personal information on private citizens for the purpose of targeted harassment -- against migrant detention center employees in an online op-ed for the New York Times: “The Treatment of Migrants Likely ‘Meets the Definition of a Mass Atrocity’ -- Children are suffering and dying. The fastest way to stop it is to make sure those responsible, including the foot soldiers, face consequences.”

....As a human rights lawyer and then as a political scientist, I have spoken to the victims of some of the worst things that human beings have ever done to each other, in places ranging from Cambodia to the Democratic Republic of the Congo to Sri Lanka. What’s happening at the border doesn’t match the scale of these horrors, but if, as appears to be the case, these harsh conditions have been intentionally inflicted on children as part a broader plan to deter others from migrating, then it meets the definition of a mass atrocity: a deliberate, systematic attack on civilians....

Thinking of what’s happening in this way gives us a repertoire of tools with which to fight the abuses, beyond the usual exhortations to call our representatives and donate to border charities....The campaign to stop the abuses at the border should exploit this sensitivity and put social pressure on those involved in enforcing the Trump administration’s immigration policies.

“Social pressure” was only the first euphemism she used.

The identities of the individual Customs and Border Protection agents who are physically separating children from their families and staffing the detention centers are not undiscoverable. Immigration lawyers have agent names; journalists reporting at the border have names, photos and even videos. These agents’ actions should be publicized, particularly in their home communities.

Cronin-Furman had the nerve to say this personal targeting was not “doxxing,” a despicable act that the Times selectively finds concerning, when it’s allegedly used against leftists. There were also the inevitable Nazi references.

This is not an argument for doxxing -- it’s about exposure of their participation in atrocities to audiences whose opinion they care about. The knowledge, for instance, that when you go to church on Sunday, your entire congregation will have seen you on TV ripping a child out of her father’s arms is a serious social cost to bear. The desire to avoid this kind of social shame may be enough to persuade some agents to quit and may hinder the recruitment of replacements. For those who won’t (or can’t) quit, it may induce them to treat the vulnerable individuals under their control more humanely. In Denmark during World War II, for instance, strong social pressure, including from the churches, contributed to the refusal of the country to comply with Nazi orders to deport its Jewish citizens.

This “human rights” researcher even came out against the idea that everyone has a right to legal counsel.

....Similar to the way the American Medical Association has made it clear that its members must not participate in torture, the American Bar Association should signal that anyone who defends the border patrol’s mistreatment of children will not be considered a member in good standing of the legal profession. This will deter the participation of some, if only out of concern over their future career prospects.

The Nazis at Nuremberg had legal counsel. The 9-11 hijackers have legal counsel. But not for these American citizens, whose only crime is that their existence offends the open-borders left and knee-jerk Trump haters.

In addition, we should deprive them of their right to travel, and let’s throw another Nazi reference while we’re at it.

....Activists...should lobby for human rights investigations, for other governments to deny entry visas to those involved in the abuses, or even for the initiation of torture prosecutions in foreign courts. For someone who is “just following orders,” the prospect of being internationally shamed as a rights abuser and being unable to travel freely may be significant enough to persuade them to stop participating.

This from the same paper who wept over the post-career outing of former CIA officer Valerie Plame.

The title to Allahpundit’s post at Hot Air encapsulated the slippery argument the paper was trying to sneak in: “NYT op-ed: I’m not saying we should doxx immigration officers staffing Trump’s detention centers, but I am sort of saying that.”

....it’s doxxing with a wink....Whatever the intent, the reality will be the same as in doxxing: Physical intimidation, a warning to the target that We Know Where You Live and that they’d best sleep with one eye open until they change their behavior. This is what’s fit for print, apparently, on the op-ed page of the world’s most august newspaper.