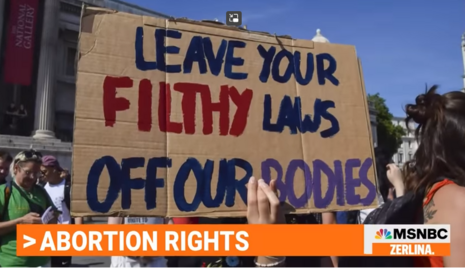 New York Times reporters pressed colleges to bow to the demands of left-wing activist students and provide abortion services to students in Wednesday’s “Colleges Are Resisting Demands to Provide the Abortion Pill.”

Liberals say they're "pro-choice," not pro-abortion. But there's no doubt this newspaper promotes abortion as essential.

Many colleges pride themselves on providing a range of sexual and reproductive health services for their students, including birth control, screenings for sexually transmitted diseases and even insurance coverage to terminate a pregnancy.

What they do not tend to provide is abortion, either by pill or through a procedure. For that, they refer students to other clinics or doctors’ offices.

For some students, that standard of care is no longer good enough, not with the Supreme Court decision to overturn Roe v. Wade. They want colleges to expand access to abortion, reduce the stress and obstacles, and give women more autonomy and control over the process.

The biggest thing on many of their wish lists: medication to end an unwanted pregnancy.

The way the sources in the story by Anemona Hartocollis and Stephanie Saul identify themselves prove one can’t be too woke for the pro-choice movement.

Niharika Rao, a senior at Barnard College in New York who uses they pronouns, said students had demanded that medication abortion be made available on campus: “College student access to abortion is being stigmatized and politicized,” they said….“Having to travel an hour there and an hour back on the bus, that could be missing an entire lab,” said Mx. Zenobia, who has also lobbied for abortion services to be more sensitive to transgender students.

The pro-life side got a couple of points in, albeit without pronouns.

Carol Tobias, president of the National Right to Life Committee, an anti-abortion organization, said that offering medication abortion on campus created the potential for complications, like in the case of an undiagnosed ectopic pregnancy. “I just don’t think this should be handed out like aspirin on college campuses to young girls who may not be aware of what’s happening,” she said.

Later, the reporters committed violence against the language: Abortion doulas?

Activists are also hoping that abortion doulas can support women taking medication for abortions. This year, Advocates for Youth, a reproductive health group, helped train 100 people -- three-quarters of them current or recent college students -- to be abortion doulas. These doulas will provide information and emotional support to those going through an abortion.

Perhaps most obnoxious was yet another fawning Times profile of the co-creator of The Daily Show, Lizz Winstead: “Using Comedy to Push for Abortion Rights.” Melena Ryzik’s story on Winstead’s abortion fundraiser show (“Bro v. Wade”) launched with a “funny” quote from Winstead.

Things are decidedly not awesome, but comic misdirection might as well be oxygen for Winstead, who has banked her career on satirizing politics and media and calling out hypocrisy, as the co-creator of The Daily Show and a host and director on the now-defunct left-wing radio network Air America. For most of the last decade or so, though, she has been singularly, steadfastly focused on one issue, abortion. Her preferred method for delivering her message is the variety show: a little schtick, a little song, a little taboo talk.