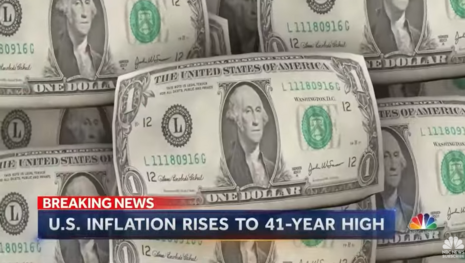 Prices are rising at the fastest rate in four decades, a painful development that has given Republicans a powerful talking point just months ahead of the midterm elections. With control of Congress very much in play, Republicans are investing heavily in a blitz of campaign advertisements that portray a dark sense of economic disarray as they seek to make inflation a political albatross for President Biden and Democrats.

Rappeport couldn’t avoid how the inflation issue was killing the administration in polls. When Republicans weren’t “seizing,” they were latching:

….Treasury Secretary Janet L. Yellen has acknowledged that the pandemic aid package contributed to inflation by spurring demand in the economy. Last month, she admitted that she was “wrong” to describe price increases as “transitory.”

Republicans have latched on to that as proof that Democrats and the Biden administration misled voters and mishandled the economy and to claim -- despite a strong labor market and other signs of economic health -- that the nation is on the verge of economic collapse.

Even though Joe Biden is president and his party controls both houses of Congress, Rappeport suggested further inflation fallout, including a recession, might be the fault of….the Republican Party talking about it in political ads?

Some economists have expressed concern that the political debate could actually make it harder for the central bank to orchestrate a so-called soft landing -- in which it cools the economy without causing a recession -- if the proliferation of campaign ads fan fears of inflation.

If inflation concerns become even more heightened and consumers begin expecting prices to keep rising, that could compel workers to ask their bosses for bigger raises in anticipation of goods and services becoming more costly. Those employers could then raise the costs of the goods and services they sell in order to cover their higher labor costs.

An (unlabeled) economist at the left-wing Center for Economic and Policy Research made the same point.

[Dean] Baker added that such a wage-price spiral is unlikely because wage growth has been slowing, but that it is possible that the Fed could make unnecessary interest rate hikes because of the hysteria surrounding inflation.

Baker was portrayed as nonpartisan, despite writing books with Biden economist Jared Bernstein and books with titles like The End of Loser Liberalism: Making Markets Progressive.

Hot Air’s Ed Morrissey mocked the paper for making “the argument that Republican campaign ads could be both inflationary and recessionary,” and argued “The impact of Federal Reserve monetary policies, high prices themselves, energy costs and shortages, and other natural market conditions will have much more impact on consumer spending than a few weeks of political ads.”