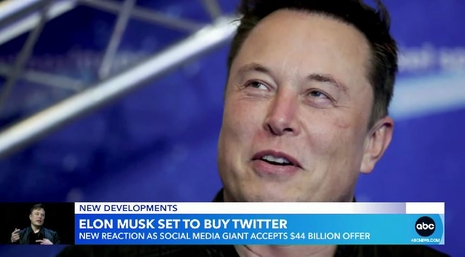 As if the New York Times news pages weren’t crazed enough about Elon Musk,Times opinionizers really kicked up the dramatics over the billionaire entrepreneur acquiring Twitter, led by editorial board member Greg Bensinger’s aggrieved take in Tuesday’s edition, “Twitter Under Elon Musk Will Be a Scary Place.”

Bensinger, whose livelihood depends on tolerance for free expression and inquiry, predicts Twitter will become a true cesspool once liberal censorship is lifted.

Twitter has never been a place for rational, nuanced speech. Expect it to get much, much worse.

The decision by Twitter’s board of directors on Monday afternoon to accept a takeover bid from Elon Musk means the company thinks the social media company would be best served by the ownership of a man who uses the platform to slime his critics, body-shame people, defy securities laws and relentlessly hawk cryptocurrencies.

Bensinger dug up old allegations against Musk’s other companies (the Times of all places should know that every corporation has its problems and that Musk is far from unique a CEO in that regard):

No wonder many Twitter employees are aghast at the prospect of Mr. Musk leading the company.

Flying in the face of the platform’s clear bias against conservative thought, Bensinger lunged for the tired lefty cliche that minorities would be hardest hit by any change.

Female Twitter users, in particular, ought to worry about whether Mr. Musk will bring his apparent disdain for women to the company he is about to own. Twitter is already a toxic place for women who use it, particularly those of color.

The editorial writer played mind-reader on the side.

As with the motives for establishing those competitors, Mr. Musk’s reasons for taking control of Twitter aren’t about free speech; it’s about controlling a megaphone. With his legion of fans, Mr. Musk will command a gigantic megaphone and be free to plug his own investments, pooh-pooh sound health regulations and shout down critics.

One of the paper’s favorite far-left writers, Anand Giridharadas, contributed “Elon Musk Is a Problem Masquerading as a Solution.”

Because a society that outsources the tending of its social interactions to people who behave like sociopaths is a society asking not for freedom but for tyranny.

The deal is the latest example of how extreme inequality is shaping American society. A small number of very wealthy people end up making decisions that affect millions of others….

Leonhardt handed over the remainder of his space to business-side reporter Andrew Ross Sorkin, who parroted his colleagues’ hysterics.

Musk’s acquisition of Twitter will reignite big questions about the influence of the billionaire class and the power of technology over our national discourse….. Musk has said he wants more “free speech” and less moderation on Twitter. What will that mean in practice? More bullying? More lewd commentary and images? More misinformation?

Several members of the far right started testing the limits of a less regulated platform, tweeting criticism of the transgender community, doubting the effectiveness of masks, or claiming that the 2020 election results were fraudulent -- topics that had been moderated by labeling or removing the false information or suspending accounts that spread it.

“Doubting the effectiveness of masks” is a “far right” view? Funny, even the Times admits that cloth masks aren’t that effective against Omicron. Perhaps they should turn themselves in?