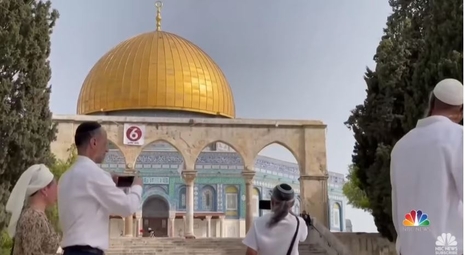 But a careful reading shows a disparity in the respect and deference granted to the three major Abrahamic religions: Islam was granted more credibility that Christianity and Judaism. How so? Islamic beliefs were stated directly, and not hedged as hypotheticals by Kingsley, while those of Christians and Jews usually were, with some formulation along the lines of “Christians believe” or “Jews believe.”

It’s neither our place or the Times’ place to judge the validity of a particular faith’s truth claims. Yet Islam does seem to benefit from outsized deference from this thoroughly secular newspaper.

On Friday morning, as clashes flared at the Aqsa Mosque in the Old City of Jerusalem, Muslims inside and outside the mosque were fasting for the 14th day of Ramadan.

A few hundred yards away, Jews were burning leavened bread, a traditional ceremony that occurs just before Passover, which formally started on Friday evening.

A few minutes to the north, Christians were beginning a procession through the Old City, holding aloft wooden crosses, retracing the route that they believe Jesus Christ took before his crucifixion.

For the first time since 1991, Passover, Easter and Ramadan were about to occur all at once -- intensifying the religious synergies and tensions that have defined Jerusalem for millenniums.

To some, the overlap embodied the wonder of Jerusalem and the semblance of coexistence among its peoples.

Note that Jews “believe God’s presence dwelled” at a particular spot, but for Muslims, the Prophet Muhammad simply “rose to heaven” from a place, no hedging needed:

For Jews, Jerusalem is their ancient capital, the seat of King David and the site of two ancient Jewish temples where they believe God’s presence dwelled. For Muslims, it was from that same site that the Prophet Muhammad rose to heaven and on which they built the compound of the Aqsa Mosque, the third-most-sacred site in Islam. For Christians, it is the city where Jesus was crucified and ascended into heaven -- where Christianity was born.

On the narrow road that circles the Old City, Christians like Ms. Bathish were heading to a service beside the Garden of Gethsemane, an olive grove full of wizened trees where tradition holds that Jesus was arrested on the night before his crucifixion….

To Ms. Bathish, it is a privilege to celebrate Easter where it started, and to live a few yards from where Christians believe Christ died.

Meanwhile, Islamic beliefs and traditions were presented as fact:

….to Muslims, this is the Aqsa Mosque compound, a 36-acre esplanade that includes the golden Dome of the Rock, a shrine marking the Prophet Muhammad’s ascent.

An imam had just read part of the Quran about the Prophet Musa, known as Moshe to Jews and Moses to Christians, and would shortly begin a chapter on Muhammad’s journey to Jerusalem.

By NewsBusters' count, Christian beliefs were hedged on four occasions, Jewish beliefs three times, and were stated straightforwardly one time each. By contrast, not once did Kingsley suggest Muslims merely “believe” this or that, but three times the reporter relayed Islamic beliefs in straightforward fashion. This admittedly tiny sample fits a hypocritical pattern at the Times of performative respect for a single religion, Islam, while the paper remains free to disrespect Christianity and Judaism.