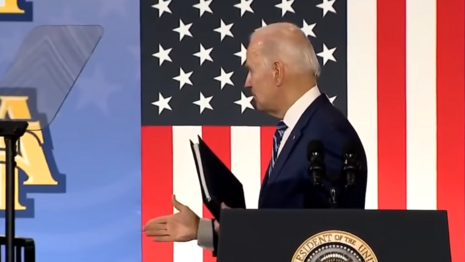 Inflation hit 8.5 percent in the United States last month, the fastest 12-month pace since 1981, as a surge in gasoline prices tied to Russia’s invasion of Ukraine added to sharp increases coming from the collision of strong demand and stubborn pandemic-related supply shortages.

But the news was not uniformly bad: A measure that strips out volatile food and fuel prices decelerated slightly from February as used car prices swooned. Economists and policymakers took that as a sign that inflation in goods might be starting to cool off after climbing at a breakneck pace for much of the past year.

The paper went out on a limb for the administration, going out in search of "several economists" to reassure Americans that the worst is behind us.

In fact, several economists said March may be a high-water mark for overall inflation. Price increases could begin abating in the coming months in part because gasoline prices have declined somewhat -- the national average for a gallon was $4.10 on Tuesday, according to AAA, down from a $4.33 peak in March....

“These numbers are likely to represent something of a peak,” said Gregory Daco, the chief economist at Ernst & Young’s strategy consultancy, EY-Parthenon….

A letup would be welcome news for the White House, because inflation has become a major liability for Democrats as midterm elections approach in November. Public confidence in the economy has fallen sharply, and as rapid price increases undermine support for President Biden and his party, they could imperil their control of Congress.

“I’m doing everything within my powers, by executive order, to bring down the prices and address the Putin price hike,” Mr. Biden said in Iowa on Tuesday afternoon, referring to President Vladimir V. Putin of Russia. Inflation had risen sharply before the war in Ukraine, though the conflict has added to the pressure on energy and commodity prices.

There are a few hopeful signs that inflation could slow in the months ahead.

Between the slowdown in gasoline prices this month and a potential easing of goods prices, even economists who have long expressed concern about inflation said it might begin to ease.

We’ll check back later to see if the paper’s optimism about the Biden Administration is warranted. Eventually Smialek dug into the grim reality.

But even if inflation slows slightly, it is likely to spend 2022 running far above the Fed’s goal, which it defines as 2 percent on average using a related but more delayed price index.

The critical question is how much and how quickly prices will come down, and recent developments ramp up the risks that uncomfortably rapid inflation could linger.

Services costs, including rent and other housing expenses, are increasing more rapidly. Those measures move slowly, and are likely to be a major factor determining the course of inflation.