The New York Times is again trying to pose the mainstream consensus on children and transgender issues -- and popular legislation like the Florida law that liberals falsely call “Don’t Say Gay” -- as dangerous and even suggesting it may encourage transgender youth to commit suicide.

Rick Rojas reported on legislation signed by the Republican governor of Alabama in Saturday’s paper: 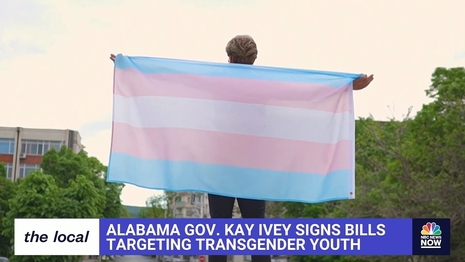 Gov. Kay Ivey of Alabama signed legislation on Friday that prevents medical professionals from providing care that aids transgender young people in transitioning, adopting some of the country’s most restrictive measures and threatening doctors and nurses with up to 10 years in prison.

Following old habit, the Times took care to position Republicans not as reacting to left-wing overreach on gender issues, but as Republicans cynically trying to create a political wedge.

The legislation is part of a flurry of bills introduced across the country as conservative lawmakers have focused their attention on transgender people and other L.G.B.T.Q. issues, including limiting what doctors call gender-affirming care and barring some transgender students from participating in school sports.

The above is misleading: Transgender students remain free to participate in school sports under their sex at birth.

For all his outrage, it took Rojas a suspiciously long while to broach the radical details of what Alabama is banning.

Although other states have also taken steps to limit medical care for transgender youth, Alabama has adopted a law that goes further than the others by making it a felony to prescribe hormones or puberty-blocking medication or perform gender-affirming surgeries….

Taken together, activists and advocates said these laws endangered transgender young people, standing in the way of critical care and inhibiting their ability to express their identity. They added that they also amplify harmful rhetoric that threatens to further marginalize a population that has a heightened risk of suicide….

The Friday edition of longtime Times journalist David Leonhardt’s "The Morning" newsletter suggested Republican legislation of a similar sort was based on hate and also a cynical attempt to launch another culture war via “wedge” issue.

They asked, “How did L.G.B.T. rights again become the subject of a culture war?”

Some of these issues of gender identity are also unavoidably vexing, involving conflicts between one person’s rights and another’s. For example, should transgender girls always be allowed play girls’ sports -- even if male puberty gave them physical strength that provides a competitive advantage? (Some feminists and female athletes say no, and some transgender women are torn.) When should schools start to teach children about gender identity? Should schools be required to tell parents if a child switches gender identity at school?

One suspects most parents would say “never” and “yes” to those last supposedly tough questions.

On several of these questions, Republicans see an opportunity to cast Democrats as out of touch. “The right is using trans identity among kids as the wedge,” says our colleague Emily Bazelon, who writes about legal issues.

Bazelon points out that this political strategy relies partly on lies that seem intended to stoke fear and hatred. In Florida, for example, some Republicans have falsely suggested that schools’ lessons about sexuality are really an attempt to “groom” students.

Bazelon is hardly an objective source for anything, given the liberal law professor and confirmed Kavanaugh opponent managed to earn a byline for a ridiculous “ice” scoop during the paper’s shameful coverage of Brett Kavanaugh, during his Supreme Court hearings.