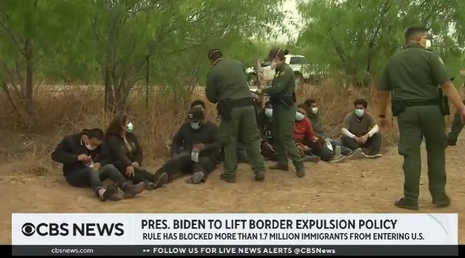 So is the COVID pandemic receding, or does it threaten to “swell anew”? Don’t ask the New York Times. It offered up both versions in twinned off-lead stories on Thursday’s front page, depending on which way the paper had to spin the danger to please the left.

Eileen Sullivan reported on the Biden administration loosening rules for allowing migrants to cross the southern border into the USA in “C.D.C. to Lift Order Restricting Immigration During the Pandemic.” She quoted Democrats -- who have spent the last two years insisting on overzealous bureaucratic Covid restrictions -- suddenly sounding like Republicans in declaring the pandemic over, at least in the name of letting in more migrants.

Pressure to lift the order has also been growing recently from Democratic members of Congress and public health experts who have said that migrants do not pose a serious transmission risk, especially at this point in the pandemic.

Covid case numbers have fallen sharply in most of the United States, and the C.D.C. has loosened many restrictions. An Omicron subvariant known as BA.2 could cause another surge here in the coming months, but it has not been shown to cause more severe illness, and vaccines continue to protect against the worst outcomes.

But right next to that story was one that took a quite different approach. While it’s now alright to dismiss COVID dangers at the border, we can’t close testing and vaccine sites for fear the pandemic may “swell anew.”

The slowing of state and local efforts comes as the virus in the United States appears, at least for now, to be in retreat, with cases falling swiftly in recent weeks.

But the cutbacks also arrive at a moment when a more transmissible version of the Omicron variant of the coronavirus, known as BA.2, is spreading through Europe, Asia and is now the dominant version of new virus cases in the United States. New coronavirus infections are edging upward once again in several states, including New York.

If another surge in the pandemic is ahead, public health officials said, it could be a challenge to quickly ramp up the vaccination and testing sites and other measures that are now being shut down.

They warned against Americans moving on from the crisis, absolutely contradicting the adjacent report suggesting Omicron wasn’t much danger and the migrant flow could resume.

Public health experts worry that Americans have moved on from the pandemic before it is over and that the United States could be unprepared for another wave. The virus is still causing the deaths of more than 700 Americans each day.