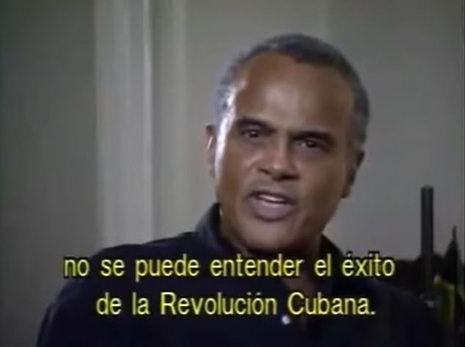 On Sunday, New York Times reporter Alex Williams paid tribute to Harry Belafonte, the aging entertainer and fan of the late Cuban dictator Fidel Castro and the story included plenty of pictures from the lefty-studded NYC gala held in the entertainer’s honor (which Belafonte was unable to attend) (click “expand”):

“He put his money where his mouth is, and he put his career on the line,” said Laurence Fishburne at a gala Tuesday night celebrating the 95th birthday of Harry Belafonte, the groundbreaking entertainer whose fight for racial justice may prove an even more lasting legacy. “And he looked pretty while he was doing it.”

Mr. Fishburne was one of more than 1,000 elegantly attired attendees at The Town Hall theater in Manhattan for the first Harry Belafonte Social Justice Awards given by Sankofa.org, a social justice organization founded 10 years ago by Mr. Belafonte….

But as presenters including Spike Lee, Whoopi Goldberg and Michael Moore made clear, Mr. Belafonte has been an outspoken activist for racial justice since the Eisenhower years, when such a stand could prove career-threatening.

There was ample room there for news-gathering: Lee and Goldberg have recently embarrassed themselves with political controversies -- Lee by flirting with 9-11 “inside job” conspiracies, Goldberg with her shockingly bad take on the Holocaust. Not to mention “dapper” Al Sharpton, whose long history of racial arson rhetoric has been laundered by years at MSNBC.

None of that was mentioned, although if a gathering of conservatives were celebrating one of their own, The Times would certainly have brought up January 6 or pestered attendees about who they thought won the 2020 election. Instead, they made it about comparing themselves to Ukrainians facing a Russian invasion:

For Mr. Belafonte, grace and wit proved useful weapons in the fight for justice, those who knew him said. “We traveled all over the country and the world together, and I always loved his sense of humor,” said Cornel West, the professor and public intellectual who received a social justice award in education. “It’s hard to have a genuine revolutionary with a sense of the comic.”

But this was not merely a night for looking back. “You can’t fight for democracy in the Ukraine and not fight for it here,” said the Rev. Al Sharpton, looking dapper in a steel-blue three-piece suit.

As the evening drew to a close, Mr. Moore sauntered onstage in a baggy black sweatshirt and cap. He pointed out that in 1927, the year Mr. Belafonte was born, the highest-grossing film was “The Jazz Singer,” featuring a scene where Al Jolson, a white actor, performs in blackface, and, he said, “there was no Voting Rights Act for Black Americans -- just like now.”

The paper previously marked Belafonte’s 90th birthday in similar fashion, rolling out the red carpet for the Castro supporter in October 2016 in “Old Warrior Takes Stock But Continues the Fight” A subhead read that Belafonte was part of a festival “focusing on voting, mass incarceration and the relationship between community and law enforcement.”

The double standard is more obvious when one watches this same newspaper work so feverishly to tie Fox News personalities to Russian dictator Vladimir Putin, no hero to anyone on the mainstream right.