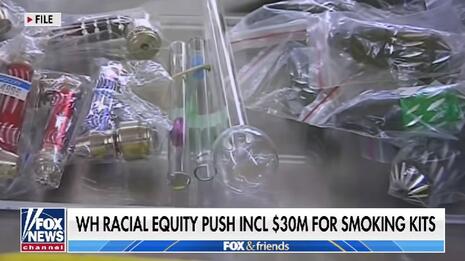 It started with a story from the Washington Free Beacon, or as the press would have it, the “conservative Washington Free Beacon.” The New York Times joined other outlets in desperately tamping down a report that made their favored political party look ridiculous: News the Biden administration was funding crack pipes to drug addicts.

The Free Beacon’s Patrick Hauf reported on February 7, “Biden Admin To Fund Crack Pipe Distribution To Advance ‘Racial Equity.’” The press hated that headline, but Hauf backed it up with facts.

HHS said the kits aim to reduce the risk of infection when smoking substances with glass pipes, which can lead to infections through cuts and sores. Applicants for the grants are prioritized if they treat a majority of "underserved communities," including African Americans and "LGBTQ+ persons," as established under President Joe Biden's executive order on "advancing racial equity."

Hauf’s story dryly concluded: “It is against federal law to distribute or sell drug paraphernalia unless authorized by the government.”

The Times response was defensive. On February 10, New York Times fact-checker Linda Qiu wrote under the headlines “Explaining the Claim About the Biden Administration and ‘Crack Pipes’ -- Conservatives have homed in on a specific provision in an overdose prevention grant program to make a misleading claim about crack pipes.”

But health care reporter Sheryl Gay Stolberg was truly aggrieved in “Uproar Over ‘Crack Pipes’ Puts Biden Drug Strategy at Risk” in Tuesday’s edition, backing off the fact-checking and shifting to accusations of racism.

President Biden came into office vowing to make “harm reduction” -- a public health approach geared toward helping drug users stay safe rather than abstain -- a central pillar of his drug policy agenda, at a time when illicit fentanyl has driven a surge in overdose deaths.

Instead, his strategy is in danger of being derailed by a Washington drama over “crack pipes” that is more about political gamesmanship than public health. The clash is a revival of decades-old fights over clean needle exchange programs that addiction experts hoped had finally been laid to rest.

Lawmakers of both parties introduced legislation last week to bar federal funding for “drug paraphernalia” in response to a story in The Washington Free Beacon, a conservative website, asserting that federally funded addiction treatment programs would distribute pipes for smoking crack cocaine as part of “safe smoking kits.” In response, White House officials said tax dollars would not be spent on pipes.

Stolberg was worried about the fate of “a new program that would have, for the first time, allowed federal funds to be spent on sterile needles for ‘syringe services’ programs.”

She admitted “Some harm reduction programs do include sterile pipes -- which are used for smoking methamphetamine and fentanyl as well as crack cocaine -- in such kits…” to prevent disease.

But there is no evidence that the Biden administration intended to pay for distribution of pipes. Nonpartisan fact checkers have debunked the claim.

Stolberg then cut into her own argument by reporting that a record number of Americans died last year from drug overdoses. So maybe the federal government isn’t truly making addiction safer?

The crack pipe fracas arrived just as experts thought they were making progress in getting politicians, including conservative Republicans, to accept harm reduction as a valid strategy….

When Mr. Biden was elected, addiction experts were elated….

Many addiction experts saw the political blowup over crack pipes as having racist undertones….