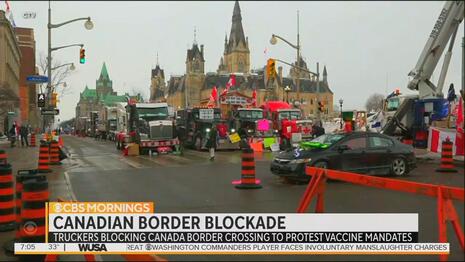 The Canadian trucker protest in Ottawa against vaccine mandates and overzealous Covid restrictions is certainly not getting the fawning Black Lives Matter treatment from The New York Times. Tuesday’s front-page story was crammed with contempt for the protesters, smeared for allegedly committing the same sort of acts that BLM protesters did during the often violent nationwide protests after the police killing of George Floyd in Minneapolis in the summer of 2020: Theft, disruption, and “desecration” of statues.

The headline under a story by Catherine Porter, Ian Austen and Sheera Frenkel upped the sense of danger, throwing in a “far-right” in the front-page headline “Ottawa Protests Become Rallying Cry for Far-Right and Anti-Vaccine Groups.” The “far-left” is barely if ever noticed by The Times (click “expand”):

Eleven days into an unruly occupation against coronavirus restrictions that has paralyzed Canada’s capital, the protests have become a rallying cry for powerful far-right and anti-vaccine groups around the world that have made the cause their own.

The demonstration in Ottawa started in January as a loosely organized convoy of truck drivers and protesters rumbling across the country to oppose the mandatory vaccination of truckers crossing the U.S.-Canada border. It soon attracted the support of other Canadians exhausted by nearly two years of pandemic restrictions.

Some were clearly on the fringe, wearing Nazi symbols and desecrating public monuments. But many described themselves as ordinary Canadians driven to take to the streets by desperation.

After a few feints toward fairness, The Times again linked the movement to the far-right:

Photos of the Canadian truckers appeared on anti-vaccine groups on Facebook and other social networks about two weeks ago. Since then, prominent far-right figures in numerous countries, including the United States, Australia and Germany, have praised the protests….

A GoFundMe page created on Jan. 14 accumulated more than $7.8 million before it was frozen by the crowdfunding platform and then halted on Friday. In a statement, the company said donors could submit requests for a refund.

Imagine The Times simply relaying the fact about the police trying to stop Antifa or BLM from raising funds in the summer of 2020, and not wailing to high heaven about incipient corporate fascism: “GoFundMe had released only about $789,000 of those donations before the fund-raiser was shut down, after the company consulted with the police.”

Notably, GoFundMe didn’t shut down fundraising on behalf of Antifa rioters or CHOP in Seattle. But Ottawa? Sounds good to The Times based on how things have been going:

In Ottawa, the occupation has paralyzed the core and political center of Canada’s capital, pushing residents to sleepless fury and anxiety, and causing many businesses to shutter, losing tens of millions of dollars.

The reporters had to admit the “festive” atmosphere in Ottawa, before switching back to condemnation that “[m]any Ottawa residents are besides themselves.”

Strange, how The Times never cared about how city residents felt about noise and closures that resulted from mob violence during the Floyd protests of 2020.

The ​​​​​​​Times is also suddenly against vandalizing statues, though on Tuesday it ran a story that approved of destroying a statute of a British slave-trader.