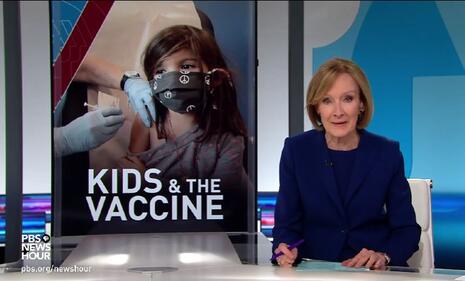 Student privacy? Never heard of it. The concept is cheerfully tossed aside when it suits the New York Times tactic of getting children vaccinated against COVID, a virus which poses extremely little danger to them.

Times reporter Jan Hoffman earned the front page Sunday with her story on child vaccination and a D.C. school principal who doesn’t much respect medical privacy: “Wary Parents Are Target of New Appeals to Vaccinate Children 5-11.”

For weeks, the school principal had been imploring Kemika Cosey: Would she please allow her children, 7 and 11, to get Covid shots?

But Mr. Kip -- Brigham Kiplinger, the principal of Garrison Elementary School in Washington, D.C. -- swatted away the “no’s.”

This was the sole hint Principal Kiplinger was overstepping his education duties.

Ever since the federal government authorized the coronavirus vaccine for children 5 through 11 nearly three months ago, Mr. Kip has been calling the school’s parents, texting, nagging, cajoling daily. Acting as a vaccine advocate -- a job usually handled by medical professionals and public health officials -- has become central to his role as an educator. “The vaccine is the most important thing happening this year to keep kids in school,” Mr. Kiplinger said.

Actually, reining in teachers unions would be the most important thing keeping kids in school.

Largely through Mr. Kiplinger’s skill as a parent-vax whisperer, Garrison Elementary has turned into a public health anomaly: Eighty percent of the 250 Garrison Wildcats in grades kindergarten through fifth grade now have at least one shot, he said.

But as the Omicron variant has stormed through America’s classrooms, sending students home and, in some cases, to the hospital, the rate of vaccination overall for America’s 28 million children in the 5-to-11 age group remains even lower than health experts had feared….

Public health officials say that persuading parents to get their younger children vaccinated is crucial not only to sustaining in-person education but also to containing the pandemic overall. With adult vaccination hitting a ceiling -- 74 percent of Americans who are 18 and older are now fully vaccinated, and most of those who aren’t seem increasingly immovable -- unvaccinated elementary school children remain a large, turbulent source of spread. Traveling to and from school on buses, traversing school hallways, bathrooms, classrooms and gyms, they can unknowingly act as viral vectors countless times a day.

Children are the age group least effected by the virus and pose minimal danger to vaccinated adults.

Parents give numerous reasons for their hesitation. And with their innate protective wariness on behalf of their children, they are susceptible to rampant misinformation….

Despite the proliferation of Covid-crowded hospitals, sick children and the highly contagious aspect of Omicron, many parents, still swayed by last year’s surges that were generally not as rough on children as adults, do not believe the virus is dangerous enough to warrant risking their child’s health on a novel vaccine.

The badgering Principal Kiplinger is seen as a hero by dividing pupils by vaccination status. One can hardly imagine the Times cheering for a religious principal demanding students raise their hands to identify themselves by religion.

He badgers in any way he can: At lunchtime he asks students to raise their hand if they have gotten a Covid shot, applauds them and urges the others to keep prodding their folks.

“I’m a real pain in the ass,” he admitted. “I lovingly harass them.”

(The Times hasn’t always been so copacetic and encouraging about principals demanding the details of his students' personal life.)