NY Times Asks How Media Got Trump ‘Dossier’ Wrong, Yet Employs the Instigator 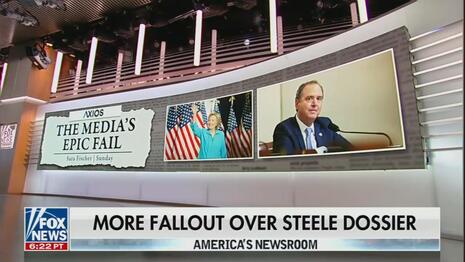 Has the day of media reckoning for the infamous Trump dossier finally dawned? Bill Grueskin, a former academic dean at Columbia Journalism School, raised eyebrows with his opinion piece in the Tuesday edition of the New York Times: “How Did So Much of the Media Get the Steele Dossier So Wrong?”

The infamous “Steele dossier” began as a hit piece put together for the Democratic Party by former British spy Christopher Steele, full of dubious anecdotes about Trump and Russia, many of them proven false. Nonetheless it fueled thousands of hostile press stories and eventually impeachment proceedings against the media’s Enemy No. 1, President Trump.

However, it's worth noting that BuzzFeed News editor Ben Smith, the person responsible for injecting the dubious dossier into the media mainstream, is now the media columnist for….The New York Times. Strangely, or perhaps not so strangely, Smith himself isn’t mentioned in Grueskin’s piece. After noting the document “would inspire a slew of juicy, and often thinly sourced, articles and commentaries about Mr. Trump and Russia,” Grueskin followed up:

Now it has been largely discredited by two federal investigations and the indictment of a key source, leaving journalists to reckon how, in the heat of competition, so many were taken in so easily because the dossier seemed to confirm what they already suspected.

Many of the dossier’s allegations have turned out to be fictitious or, at best, unprovable….

Grueskin even went after liberal favorite Rachel Maddow for assuming the truth of the allegations, then reminded us of how the document was discredited in December 2019 by an investigation by the Department of Justice that “raised doubts about the reliability of some of Steele’s reports” (click “expand”):

But the turning point seemed to be with an arrest of one of Steele’s primary sources.

Then, this month, a primary source of Mr. Steele’s was arrested and charged with lying to the F.B.I. about how he obtained information that appeared in the dossier. Prosecutors say that the source, Igor Danchenko, did not, as The Wall Street Journal first reported, get his information from a self-proclaimed real estate partner of Mr. Trump’s….

So where did much of the press go wrong?

Mr. Trump’s choice of Paul Manafort to serve as his campaign chairman reinforced the idea that he was in the thrall of Russia. Those fears were borne out when a bipartisan Senate committee found Mr. Manafort to be a “grave counterintelligence threat” because of his ties to a Kremlin agent. So, given all those connections, it was easy to assume that the dossier’s allegations must also be true. The distinction between what journalists assume and what we verify is often the difference between fiction and reality.

The day after the dossier came out, Mr. Trump told reporters: “It’s all fake news. It’s phony stuff. It didn’t happen.” (Washington Post fact-checkers would eventually catalog more than 30,000 Trump falsehoods during his term in the White House.) When a well-known liar tells you that something is false, the instinct is to believe that it might well be true.

Yet Trump’s accurate descriptions of the dossier remain wrongly included in The Post’s vaunted database as “false and misleading statements” -- a collection bolstered with mere predictions by Trump or Trump spin that Post liberals don’t agree with.

He admitted that peer pressure bent the press toward Trump loathing and contributed to the wide play the allegations received:

The situation also became complicated because some reporters simply didn’t like or trust Mr. Trump or didn’t want to appear to be on his side.

As the former Times reporter Barry Meier writes in his book “Spooked,” “Plenty of reporters were skeptical of the dossier, but they hesitated to dismiss it, because they didn’t want to look like they were carrying water for Trump or his cronies.”

Grueskin suggested news organizations step up and admit their failings, and found relevant examples from political history. But again, the article skipped the elephant in the room -- Ben Smith.

Axios issued a terse summary of the “media’s epic fail on the Steeler dossier.” Smith, now a Times media columnist, told Axios, “My view on the logic of publishing hasn't changed." Smith has been reluctant to discuss his time at BuzzFeed in his Times column, citing his (controversial) continued holding of stock options from his former company.