Classic NY Times Headline: ‘Republicans Pounce on Schools as a Wedge Issue to Unite the Party’ 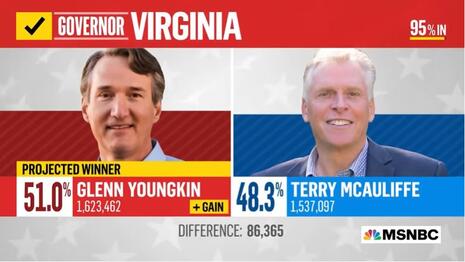 As Democrats ponder their newly vulnerable electoral state, here’s a New York Times headline that’s a neat encapsulation of media bias: “Republicans Pounce on Schools as a Wedge Issue to Unite the Party.” That's the online headline to the front-page Thursday story by Lisa Lerer and Jeremy Peters.

It’s two liberal media tropes in one line: the idea of Republicans cynically “pouncing” on defenseless Democrats, and the idea of Republicans using a sinister, surely discreditable “wedge issue” to win votes from the gullible. The blurb on the nytimes.com web page all but accused Republicans, including winning Virginia Republican gubernatorial candidate Glenn Youngkin, of stoking white resentment: "Rallying around what it calls 'parental rights,' the party is stoking white resentment and tapping into broader anger at the education system."

The story itself wasn’t much better, notwithstanding a few nods to the genuine parental outrage against Democratic factions like teachers unions:

After an unexpectedly strong showing on Tuesday night, Republicans are heading into the 2022 midterm elections with what they believe will be a highly effective political strategy capitalizing on the frustrations of suburban parents still reeling from the devastating fallout of pandemic-era schooling.

Seizing on education as a newly potent wedge issue, Republicans have moved to galvanize crucial groups of voters around what the party calls “parental rights” issues in public schools, a hodgepodge of conservative causes ranging from eradicating mask mandates to demanding changes to the way children are taught about racism.

Yet it is the free-floating sense of rage from parents, many of whom felt abandoned by the government during the worst months of the pandemic, that arose from the off-year elections as one of the most powerful drivers for Republican candidates.

The Times spun hard to make it a white on black race issue while soft-pedaling the pernicious nature of Critical Race Theory, which teachers are marinated in and which warps the way history and race are discussed in schools. Here are Lerer and Peters sounding a bit like MSNBC’s crazed Joy Reid:

The message worked on two frequencies. Pushing a mantra of greater parental control, Glenn Youngkin, the Republican candidate for governor in Virginia, stoked the resentment and fear of some white voters, who were alarmed by efforts to teach a more critical history of racism in America. He attacked critical race theory, a graduate school framework that has become a loose shorthand for a contentious debate on how to address race. And he released an ad that was a throwback to the days of banning books, highlighting objections by a white mother and her high-school-age son to “Beloved,” the canonical novel about slavery by the Black Nobel laureate Toni Morrison.

But at the same time, Mr. Youngkin and other Republicans tapped into broader dissatisfaction among moderate voters about teachers’ unions, unresponsive school boards, quarantine policies and the instruction parents saw firsthand during months of remote learning....

Lerer and Peters again tried to make justified parental outrage over closed schools about white racism instead: "While the conservative news media and Republican candidates stirred the stew of anxieties and racial resentments that animate the party’s base -- thundering about equity initiatives, books with sexual content and transgender students on sports teams..."

They finally addressed why those parents are so angry, and how Virginia schools were among the slowest to reopen:

Already, the effects of remote learning on parents have been severe: School closures drove millions of parents out of the work force, led to an increase in mental health problems among children and worsened existing educational inequalities. Many of those effects were borne most heavily by key parts of the Democratic base, including women and Black and Latino families.

After noting that when Democrat McAuliffe “appeared with Randi Weingarten, the influential president of the American Federation of Teachers,” who helped keep schools shuttered for a year, it “drew rebukes from Republicans,” the reporters admitted that thanks to teachers unions and school boards, “Virginia was among the East Coast states that were slowest to reopen schools for full-time, in-person learning.”