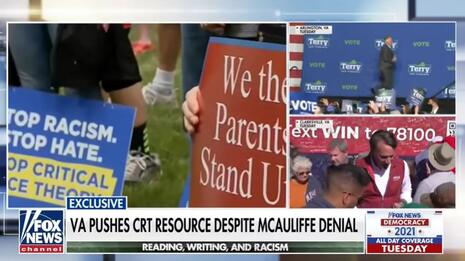 In the final days of the tight race for Virginia governor, the candidates are turning to the unlikeliest of campaign props: a novel from 1987.

A new online advertisement released this week by Glenn Youngkin, the Republican candidate, features a mother who pushed to have Toni Morrison’s “Beloved” banned from her son’s English curriculum eight years ago, citing the book’s graphic scenes….

The reporters made sure to provide pro-Democratic context, while portraying parent’s educational concerns as frantic GOP attacks:

Left unsaid in the ad was that the mother and her husband are Republican activists, that their son was a high school senior taking advanced placement English when he read the passages that supposedly gave him nightmares, or that he later went on to work briefly in the White House under former President Donald J. Trump and now works for the G.O.P.’s congressional campaign committee….

To Democrats, the Youngkin ad was both a throwback to the days of book banning and a coded insult to one of America’s most celebrated Black authors, after months of frantic Republican alarms, in Virginia and nationwide, about how schoolchildren are being educated about racism.

This year, Mr. Youngkin is centering his closing messaging on what he calls “parents’ rights” -- an all-encompassing rubric for conservative causes like opposing mask mandates, vaccine requirements and transgender rights, and stoking fears about the way race is taught in the schools.

For months, the conservative media have lavished national attention on local events in suburban Loudoun County, Va., including a sexual assault case that revived Republican criticism of gender-inclusive bathroom policies in schools, and the suspension of a physical education teacher who refused to address transgender students by the pronouns that they identified with. Conservatives have also falsely claimed that Virginia schools are teaching “critical race theory,” an advanced academic concept that is not part of classroom instruction in the state.

Catching up to a related October 22 front-page Times story by Stephanie Saul, which also portrayed Republicans as being hysterical over nothing, i.e. Critical Race Theory: “Sights Set on School Districts As G.O.P. Targets Race Theory.”

[Scarlett] Johnson’s rapid transformation into a sought-after activist illustrates how Republicans are using fears of critical race theory to drive school board recalls and energize conservatives, hoping to lay groundwork for the 2022 midterm elections.

Education leaders, including the National School Boards Association, deny that there is any critical race theory being taught in K-12 schools.

Teachers’ unions and some educators say that some of the efforts being labeled critical race theory by critics are simply efforts to teach history and civics.

“We should call this controversy what it is -- a scare campaign cooked up by G.O.P. operatives” and others to “limit our students’ education and understanding of historical and current events,” said Randi Weingarten, the president of the American Federation of Teachers.

In some places, the tone of school board opponents has become angry and threatening, so much so that the National School Boards Association asked President Biden for federal law enforcement protection.

Soon after Saul’s story was filed, the NSBA issued an apology after its accusatory letter caused an internal uproar, saying there was “no justification for some of the language included, including accusations of “domestic terrorism” among concerned parents. Yet the Times only mentioned the update in a separate story, failing to update this one.