A return by the New York Times to its halcyon days of indiscriminate Walmart-bashing?

Chris Colin, a freelancer who used to write for Salon.com, made the front of Wednesday’s Business Day section with an assault on the retailing giant. It has it all: low wages, poor health care, and backward Louisiana Walmart shoppers supposedly angry about mask-wearing: “‘Every Day Is Frightening’: Working For Walmart Amid Covid.”

Colin began with the story with its sympathetic center, hiding what will be revealed as a sneaky press release for the leftist Walmart-haters calling themselves "United for Respect." 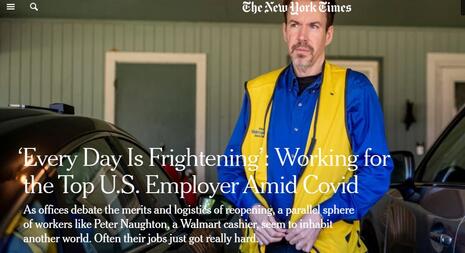 It was a hot morning in Baton Rouge, La., the day that Peter Naughton woke up on the floor.

Sore, disoriented, he’d already grasped what his mother was now telling him: He’d had another seizure. But he also grasped a larger truth: He needed to pull it together and somehow go to work.

A cashier and self-checkout host at the nearby Walmart, Mr. Naughton dreaded depleting his limited paid time off in the midst of a pandemic. His mother, for her part, insisted that her epileptic son, then 44, stay home and rest. The hours after a seizure were difficult enough. Toss in the stress of Covid-19 and a customer base that largely -- and often angrily -- rejected mask use, and a day at work seemed anything but recuperative.

It’s good the Times recognizes the hard work of “essential workers,” who risk their health so others can stay safer during the pandemic. But is it really fair to blame Walmart for extending the pandemic?

Colin didn’t skimp on the melodrama.

The conversations Mr. Naughton describes may be epidemiologically out of step, but he and thousands of others seem trapped in an America-right-now vortex, a swirl of politics, belief, resentment and fear….

“If I ask people to wear a mask or socially distance at work, they get mad and tell the manager. Then I have to get coached. If you get coached too many times, you lose your job,” Mr. Naughton said, referring to the company’s system for managing worker infractions….

Draped over this dynamic are often the stark realities of poverty, and the stresses of navigating a low-paying job in a high-pressure situation. And so an already strained situation strains further. Bitterness over masking requests, job insecurity, a run on bottled water, vaccine politics -- tensions routinely boil over in his store and beyond, Mr. Naughton said.

Deep in the article, after you've turned from B-1 to B-6, in paragraph 20, a reader discovers this story is an advertisement. 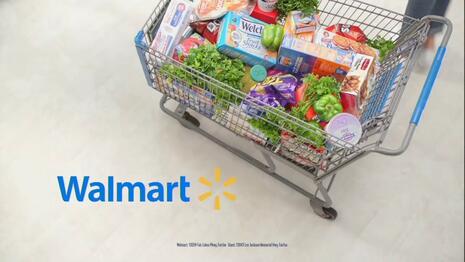 ….Covid appears to have been good for the bottom line: During fiscal 2020, the company generated $559 billion in revenue, up $35 billion from the previous year. But labor activists say too little of that money has gone toward work force protections, which in turn has prolonged the pandemic.

According to United for Respect, a nonprofit labor advocacy group for Walmart and Amazon workers -- Mr. Naughton is an outspoken member -- safety measures remain deeply insufficient.

Shouldn't an honest "news" report disclose their sympathetic subject's "outspoken member" status much higher in the story? He's an activist for a group that has been carrying out a ten-year long campaign against Walmart.

This is just a continuation of the paper’s long-standing anti-Walmart jihad, disguised as Covid concern. Walmart, America’s largest private employer and a key door-to-door delivery provider during the Covid crisis, is actually responsible for "prolonging the pandemic."

Then the reporter cites that group's suspiciously precise extrapolation that Walmart caused 133 deaths among its employees.

In a survey the group conducted of Walmart associates -- the term the company uses for all non-temporary employees -- in May 2020, nearly half said they had come into work sick or would do so, fearing retaliation otherwise. This past April the group released a report with the public health nonprofit Human Impact Partners, finding that Walmart could have prevented at least 7,618 Covid cases and saved 133 lives with a more robust paid sick time policy….

Naturally, United for Respect is pushing for Walmart to provide "hazard pay" of an additional $5 an hour. The story doesn't note Walmart just raised their wages for the third time in a year, to an average of $16.40 an hour.