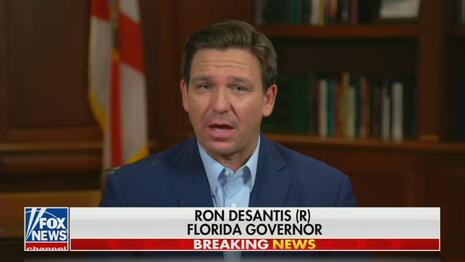 With his New York Times column on Monday, “Ron DeSantis, How Many Must Die?,” angry liberal columnist Charles Blow has earned the honor of being outclassed by the eternally classless Paul Krugman, who gets marginally less personal when attacking Florida Gov. Ron DeSantis’s handling of the coronavirus crisis.

Besides being hateful, Blow’s column is incredibly thin on facts to support his case for DeSantis the killer. He can’t fault DeSantis on vaccinations, because Florida is at the national average on that score, and better than most states in the South. Instead, his sole attack line is mask mandates in schools, which could not have affected the number of Covid cases yet anyway.

After bashing the Trump administration for its deadly “reflexive opposition to the facts,” Blow went after DeSantis, whom the media is attacking as Trump’s possible political successor.

Perhaps no politician has taken the reins from Trump with more vigor -- and disastrous effects -- than Gov. Ron DeSantis of Florida, a man who thinks he could be the next Republican president. But to supplant the last leader of his party, he has to out-Trump Trump.

To accomplish this meteoric rise, he needed to do two things. First, become the darling of the Trump freedom fighters, fighting for the right to get sick and die….

Take out the nasty innuendo about DeSantis sacrificing his citizens for political gain, and Blow’s sole factual complaint remains the fact that DeSantis banned Florida school districts from establishing mask mandates for students.

Children in schools are not major Covid spreaders, and there are severe instructional disadvantages to children being masked up all day. In any case, schools have just opened back up for the fall, so a lack of school mask mandates would have nothing to do with the current high Covid death rate in Florida in any case, given that deaths tend to lag new cases by several weeks.

But as the Delta variant became more of a threat and people like DeSantis became more entrenched, waging war against mask mandates in their states, Biden had no choice but to engage more directly….

The citizens of Florida do not even support DeSantis’s politically calculated pandemic positions. A Quinnipiac University poll released last week found that “six in 10 Floridians support requiring masks in schools,” and “61 percent say recent rise in Covid-19 cases in Florida was preventable.”

The school mask mandate is Blow's sole justification for this angry rant. Again, masks in schools couldn’t have had the slightest impact on Florida’s current Covid death rate, given that schools have just opened up for fall.

Some bodies must be sacrificed to appease the gods of partisan resistance.

Blow bowed out with this vile charge.

Yes, Florida, DeSantis is allowing you to choose death so that he can have a greater political life.

What's ironic is that on any other issue, liberals like Blow would insist America take cues from those same sophisticated socialist democracies of Europe.