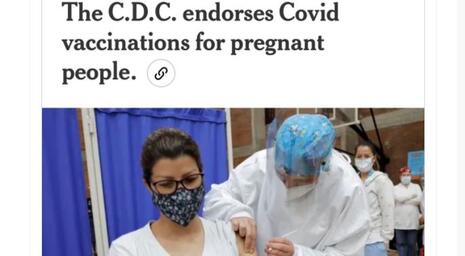 After over a year of smug insistence about “following the science” on Covid, The Times used the anti-biological, transgender-approved term “pregnant people,” as if considering as a possibility the biological impossibility of men getting pregnant. The original headline to the online story: “The C.D.C. endorses Covid vaccinations for pregnant people.” That silliness apparently got changed to “The C.D.C. endorses Covid vaccinations during pregnancy.”

Here was how Rabin led off her piece: “Federal health officials on Wednesday bolstered their recommendation that pregnant people be vaccinated against Covid-19, pointing to new safety data that found no increased risk of miscarriage among those who were immunized during the first 20 weeks of gestation.”

But Rabin may get in trouble for penning this paragraph:

“Pregnant women” were cited three times. How could a Times reporter so arrogantly assume the gender of people who give birth! 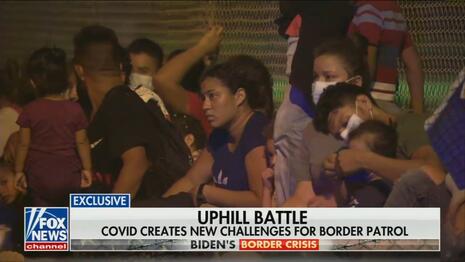 After denying biology, there was a denial of math in another Covid story, this one dealing with President Biden’s migrant problem at the southern border. But don’t worry, NewsBusters readers! Despite disturbing news reports from the Texas border, The Times assured us that there’s no danger of the migrants spreading Covid.

Jordan's dishonest piece continued. Note how her narrative and quote from the McAllen mayor were undercut by the reality of having to set up a quarantine center (click “expand”):

Amid a ferocious resurgence of coronavirus infections in many parts of the country, some conservative politicians, including the governors of Texas and Florida, have blamed the Biden administration’s failure to halt the influx of migrants for the soaring case numbers.

In fact, the massive operation in McAllen and others like it make that extremely unlikely, and public health officials and elected leaders here note that the region was facing rising case numbers even before the recent increase in border crossings.

“We can’t attribute the rise in Covid numbers to migrants,” Mayor Javier Villalobos of McAllen said in an interview. He said city and county officials issued a disaster declaration on Aug. 2 and moved to set up a quarantine center after it became apparent that the surge in border crossings posed a health risk to local residents.

The Times, hypervigilant about stopping the spread of Covid when it comes to mask mandates and vaccine passports, suddenly grew blasé when confronted with the possibility open borders could be helping fuel the spread: “Of the 96,808 migrants who have passed through McAllen this year and been checked for the coronavirus, 8,559 had tested positive as of Tuesday.”

She defended the Biden administration on immigration by citing irrelevant statistics (click “expand”):

Yet the prevalence of the virus among migrants thus far has been no greater than among the U.S. population overall, according to medical experts, and the highest positivity rates in the country are not in communities along the border. Rather, they are in areas with low vaccination rates and no mask mandates.

The positivity rate among migrants serviced by Catholic Charities in McAllen reached 14.8 percent in early August, after hovering between 5 and 8 percent from late March to early July, but it has not surpassed the rate among local residents.

In Hidalgo County, the migrant positivity rate was about 16 percent last week compared with 17.59 percent for residents, who have had little, if any, interaction with the migrants.

But the bottom line is that there are now 8,559 more infected people in America now, who risk leaving the camp and potentially spreading the virus, which is what happened at a Whataburger near a quarantine hotel in late July, as local news reported (and which Jordan properly included in her report).

That’s simple math. Relative percentage of infection rates is an irrelevant statistic meant to let the Biden administration off the hook on its irresponsible immigration policy.