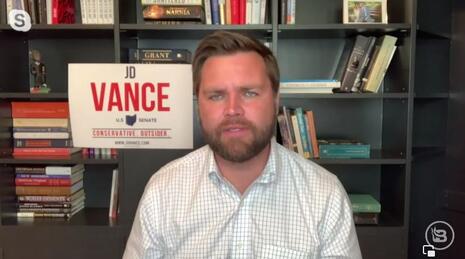 The full deck of online headlines:

Should news outlets contextualize false claims made by powerful people? Or ignore them completely? There is no consensus in the industry, but its thinking continues to evolve.

Tracy used the House Select Committee hearings into the January 6 Capitol breach to criticize a series of Republican misstatements about that day’s events. It then took an odd partisan turn, dragooning into the conversation the left’s newest populist enemy, author J.D. Vance (Hillbilly Elegy), running as a Republican for a U.S. Senate seat representing Ohio.

In American life, truth is now contested. And while this has profoundly affected the country’s politics, and so much else, it has raised unique challenges for one group in particular: journalists.

After all, the high-profile Republicans who are obfuscating the events of Jan. 6 are undeniably newsworthy. Ms. Stefanik is the third-ranking House Republican….

Their political influence would normally demand coverage. Yet journalists will never feel comfortable publishing anything they know to be false….

Mainstream outlets have tried to square this circle by contextualizing problematic quotes and allegations. But this is difficult to do well, and it may be impossible to strike the exactly correct balance.

Knee-jerk attacks on right-of-center rhetoric (which the Times actively undertakes from within) is repackaged as the press being sensitized to political lies.

Over the course of Mr. Trump’s presidency, the news media became more comfortable with straightforwardly identifying falsehoods, said Dafna Linzer, who was until recently the managing editor of politics for NBC News and MSNBC.

(It’s a good thing we’ve never had a president that tells whoppers before Trump came along!)

Next, the odd left turn toward Cleveland.

In Cleveland, The Plain Dealer and its website have for the past few months tried an alternative tactic. When its reporters and editors determine that a notable politician -- be it Josh Mandel, a Republican Senate candidate in Ohio; Dennis Kucinich, a Democratic candidate for Cleveland mayor; or Mr. Trump -- has said something false and designed primarily as propaganda, they do not publish it, even in a way that debunks it.

Chris Quinn, the editor of The Plain Dealer, explained the new policy in March: “We do not knowingly publish ridiculous and idiotic claims.”

As an example of such, Quinn picked out Republican Senate candidate J.D. Vance of Ohio (pictured above) a Republican hated by the left, while doing his own gross partisan exaggeration. Tracy played along:

Now, Mr. Quinn urges his reporters to seek context. He offered an example from this month, in which a reporter covered a forum in which the Republican Senate candidate J.D. Vance repeatedly referred to illegal immigration as “dirty.” The reporter produced an analysis of how Mr. Vance had transformed in a few years from being someone who would have condemned such language.

“Four years ago,” Mr. Quinn said, describing his newspaper’s own evolution, “we would have had a story: ‘J.D. Vance came to Cleveland, called immigrants “dirty.”’

(That would have been quite the phony headline. An analysis of the Plain Dealer story reveals an anti-Vance hit piece, quoting brief bits from Vance’s speech that don’t come close to matching the horror of Quinn’s proposed headline: Vance is quoted saying “dirty” once, while encapsulating the concerns of a local woman. The word’s other five appearances come from the reporter, Andrew Tobias, in an effort to link Vance to another liberal bogeyman, Fox News host Tucker Carlson.)

This approach has its own drawbacks, including opening up the newspaper to allegations of partisan bias. But to many industry leaders, the days of “he said, she said” without the weight of the journalist’s judgment are long gone.

On that we can agree.