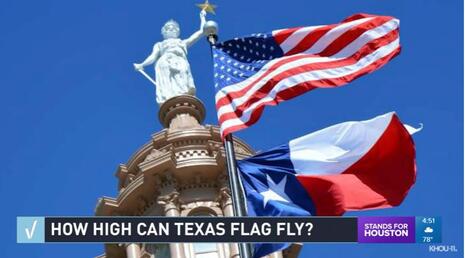 A front-page New York Times story Saturday by Reid Epstein managed to pack in 18 hostile ideological labels into an 1,800-word story on a sadly familiar theme at the paper -- how far Texas is hurdling to “the right" politically under GOP control -- in “Can Texas Turn Further Right? Top 2 Republicans Say It Can.”

The paper is running versions of this same story every week now, often on the front page, leading NewsBusters to make the same observation: Is there any room left “on the right” for Texas to move by now, since the state has supposedly been heading that way since at least 2009?

The Times in recent years has somewhat reined in its obsessive "conservative" labeling, but Epstein's piece serves as an homage to those days: Besides the twelve “conservative” labels in the text, two “rights” in the headline, and two “far right” one “hard-right,” and one “right-wing” in the story. Those figures don’t even include quoted material.

One is a former State Supreme Court justice who acts with a lawyer’s caution; the other a Trumpist firebrand who began his political career in the world of conservative talk radio. They have sparred at times, most recently this winter over the deadly failure of their state’s electrical grid.

But together, Gov. Greg Abbott and Lt. Gov. Dan Patrick, the two most powerful men in Texas, are the driving force behind one of the hardest right turns in recent state history.

The two Republicans stand united at a pivotal moment in Texas politics, opposing Democrats who have left the state for Washington in protest of the G.O.P.-controlled Legislature’s attempt to overhaul the state’s election system -- blocking Republicans from advancing any bills to Mr. Abbott’s desk. Any policy differences between the governor and lieutenant governor have melted away in the face of the realities of today’s Republican Party, with a base devoted to former President Donald J. Trump and insistent on an uncompromising conservative agenda.

“The lieutenant governor reads off the playbook of the far right, and that’s where we go,” said State Senator Kel Seliger, a moderate Republican from Amarillo. “The governor less so, but not much less so.”

Mr. Abbott, 63, a lawyer who has held or been campaigning for statewide office since 1996, has shifted to the right as he prepares for a re-election bid next year that will involve the first challenging Republican primary he has ever faced. While Texas voters broadly approve of his leadership and he is sitting on a $55 million war chest, far-right activists and lawmakers have grumbled about his perceived political moderation….

The Times rarely if ever drops the term “far left” to describe an American political situation.

Both leaders are highly cognizant of what the Republican base wants: Stricter abortion laws. Eliminating most gun regulations. Anti-transgender measures. Rules for how schools teach about racism. And above all there is Mr. Trump’s top priority: wide-ranging new laws restricting voting and expanding partisan lawmakers’ power over elections.

Mr. Abbott and Mr. Patrick have tussled occasionally in recent years over how far to the right to take Texas….