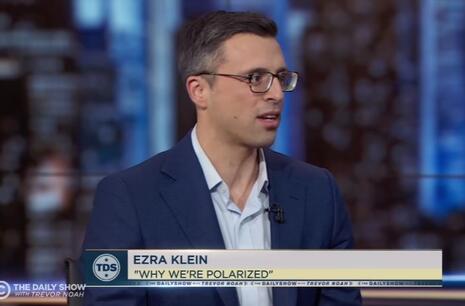 Ezra Klein, founder of the left-leaning “news-explainer” site Vox and now a high-profile New York Times opinion columnist with his own Times podcast, was granted over 2,000 words to condone the bombing of oil pipelines by environmental radicals, “It Seems Odd That We Would Just Let the World Burn”.

Klein’s new piece, inspired by an eco-terrorist book by Andrew Malm with the non-too-subtle title How to Blow Up a Pipeline, is contemptible, not just for the casual embrace of violent radicalness and economic ruin, but the hypocrisy, given the hysterical warning that an op-ed by Sen. Tom Cotton that advocated deploying the military to quell the riots of Summer 2020 somehow put black Times staff in danger. Opinion editor James Bennett was forced out for running that piece.

Klein is, at the very least, dismissive of the evils of blowing up oil pipelines and yachts and dragging people out of their gas-guzzling cars. Would any people killed in such terrorist rampages be considered merely collateral damage in the war for Mother Earth? Klein avoids the question.

I spent the weekend reading a book I wasn’t entirely comfortable being seen with in public. Andreas Malm’s “How to Blow Up a Pipeline” is only slightly inaptly named. You won’t find, anywhere inside, instructions on sabotaging energy infrastructure. A truer title would be “Why to Blow Up a Pipeline.” On this, Malm’s case is straightforward: Because nothing else has worked.

“Here is what this movement of millions should do, for a start,” Malm writes. “Announce and enforce the prohibition. Damage and destroy new CO2-emitting devices. Put them out of commission, pick them apart, demolish them, burn them, blow them up. Let the capitalists who keep on investing in the fire know that their properties will be trashed.”

The question at the heart of Malm’s book is why this isn’t happening already. “Were we governed by reason, we would be on the barricades today, dragging the drivers of Range Rovers and Nissan Patrols out of their seats, occupying and shutting down the coal-burning power stations, bursting in upon the Blairs’ retreat from reality in Barbados and demanding a reversal of economic life as dramatic as the one we bore when we went to war with Hitler,” he says.

As to whether blowing up pipelines would work here, and now, Malm is less convincing. The likeliest outcome is that a few dozen climate activists would be jailed for years (as some already have been) and a wave of laws criminalizing even peaceful protest would sweep the nation. He has no answers for those who fear the probable political consequences: an immediate backlash that sweeps enemies of climate action into power, eliminating even the fragile hopes for policy progress.

Klein seems mollified that Malm may be satisfied with merely blowing up rich people's yachts (with the rich people possibly inside?).

Elsewhere in the book, Malm is firmly opposed to tactics that could signal contempt or hostility for the working class. But the consequence of a wave of bombings to obliterate energy infrastructure would be to raise the price on energy immediately, all across the world, and the burdens would fall heaviest on the poor. Malm tries, at times, to resolve this tension, suggesting that perhaps the targets could be the yachts of the superrich, but in general he’s talking about pipelines, and pipelines carry the fuels for used Nissans and aged ferries, not just Gulfstream jets.

Klein’s opposition to bombing seems purely utilitarian; if he thought they would benefit the cause, would he be wholly in favor of them?

The embrace of eco-terrorism reduces the paper’s supposed horror (and the outrage from Klein himself) over the violent January 6 storming of the U.S. Capitol to convenient partisan posturing.

PS: This is not the first time that the Times plugged Malm and blowing up pipelines.