Slow news days in the Biden administration? The New York Times print edition on Thursday was once again crammed with activist photo-journalism in its news pages. While LGBTQ “heroes of color” recently had to make do with a single page of photo-journalism, the immigrants (whose stories can be genuinely affecting) received five full pages in Thursday’s news section devoted to their journeys to get into America, legally or not: “On the Border, Self-Portraits of Uncertainty and Hope.” This series of artistic black-and-white photographs were aimed at building sympathy.

There’s no mention of immigrants potentially bringing in Covid, a subject the paper would otherwise be fear-mongering about. Or any news about the Canadian border, which has been ridiculously Covid-locked for over a year, with little Times coverage.

The opening texts differ substantially between print and online. The online version of the story from Adam Ferguson and Anatoly Kurmanaev began: 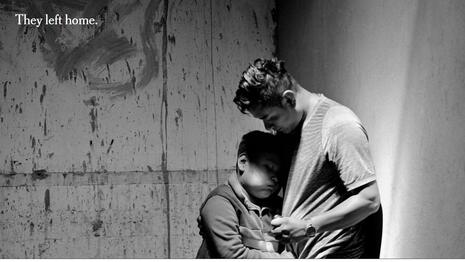 The life of a migrant at the border waiting for the right moment to cross into the United States is often in flux. The New York Times tried to capture a piece of this uncertain journey by giving people a chance to convey it in their own way.

The Times photographer Adam Ferguson mounted a medium-format camera onto a tripod with a cable release and then stepped back, allowing the migrants to choose the moment to press the button.

The print version of the five-page photo feature opened:

That’s the message American officials have been trying to send to the hundreds of thousands of migrants intent on making it to the U.S. border -- but it is unlikely to be heeded.

The subhead over the story of Guatemalan migrant Linfir Lopez read, “Help awaits in Oklahoma. But first they have to get there.”

But there’s nothing said about what the countries of Guatemala or Honduras or El Salvador owe to their own citizens -- every responsibility for the citizens of those countries evidently falls wholly upon American generosity.

This is ironic, considering the New York Times’ education "1619 Project,” designed for schools, claims America was founded on enslaving people of color. Yet the paper is now encouraging people of color to come here, as if somehow America would be a great place for them to be. Imagine that.