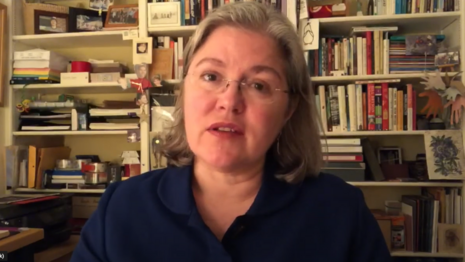 The Memorial Day edition of the New York Times editorial page led with an obnoxious, elitist essay by Margaret Renkl, a contributing opinion writer based in Nashville. Her attempt at a Memorial Day tribute was rendered worthless by an extraneous condemnation of her fellow Americans for not doing enough to stop the coronavirus, hidden under the benign title “A New Vision of National Service.”

That bland title hides hypocritical rhetoric that shows Renkl sees her fellow Americans as unpatriotic for succumbing to the human urge to gather together, except when it’s time for George Floyd protests -- those particular “social gatherings” are lauded by Renkl, with no mention made of the coronavirus.

An anecdote about watching television coverage of Vietnam War as a child with her father segued into a standard liberal condemnation of war and the marring of the spirit of Memorial Day.

I don’t mean to glorify war. I have vehemently opposed every ill-advised military excursion this country has engaged in and mourned the unnecessary suffering that our leaders’ arrogance has caused all over the globe. But ever since I sat at my father’s knee and listened to the nightly casualty count in Vietnam, I have never been anything less than grateful for the servicemen and women themselves, and every year I find it a little bit heartbreaking to be reminded of what Memorial Day has become.

(Spot the fallacy above? Who doesn’t oppose “ill-advised military excursions”? But everyone has their own opinion of what constitutes “ill-advised.”)

Renkl was searching for a non-militarized way “to nurture communitarian qualities” on Memorial Day, and she thought she had found it in coronavirus protection efforts – or at least, some virtuous Americans like her had. As for those weak humans who tried to keep in contact with their fellow human beings, she questioned their patriotism.

….We have lately been reminded of the absolute necessity for Americans to be motivated by warm fellow feeling across divides of region, race, class, politics, religion, age, gender or ability; to cultivate a sense of common purpose; to make sacrifices for the sake of others. And that reminder came in the form of watching what happens when such qualities are absent, even anathema, in whole regions of the country.

Lied to by the president of the United States and egged on by craven commentators, many Americans staunchly refused to give up social gatherings, no matter that staying home was the best way to keep the virus from spreading. They refused to wear masks, and they mocked and harassed people who did. Some are, even now, rejecting a vaccine that could keep the virus from mutating into so many variants that there will be no hope of containing it. And they have done it all, they insist, because they are patriots.

The Twitter account Show Me The Data forwarded an excerpt from a June 2020 Renkl column celebrating the summer’s mass protests against racism. The sarcastic question it posed to Renkl: “So it [was] good for Americans to gather socially and spread the virus when it was aligned with a cause you support?"

Another Renkl column on the same topic a week later actually bragged about the massive numbers gathered at a Nashville protest with no mention of the virus.

On June 4, five days later, the founding members of Teens for Equality….were leading a march of protesters some 10,000 strong, according to police estimates….what they see is the strength in their numbers and the power of their own voices.

What about the coronavirus?

In the hypocritical world according to Renkl, social gatherings are bad when they involve funerals, weddings, education, graduations, family visits at Thanksgiving and Christmas – but they are suddenly perfectly safe when thousands gather in the streets for left-wing rabble-rousing.