As the “lab leak” theory regarding the origins of the Wuhan coronavirus gains credibility among scientists and in the press after being previously demonized, some aren't ready to let go: The New York Times’ leading COVID-19 beat reporter, Apoorva Mandavilli, showed Wednesday morning that she’s unfit for her job with a tweet suggesting that even investigating the possibility the Wuhan coronavirus did not originate at a “wet market” but escaped from the Wuhan Institute of Virology was racist. 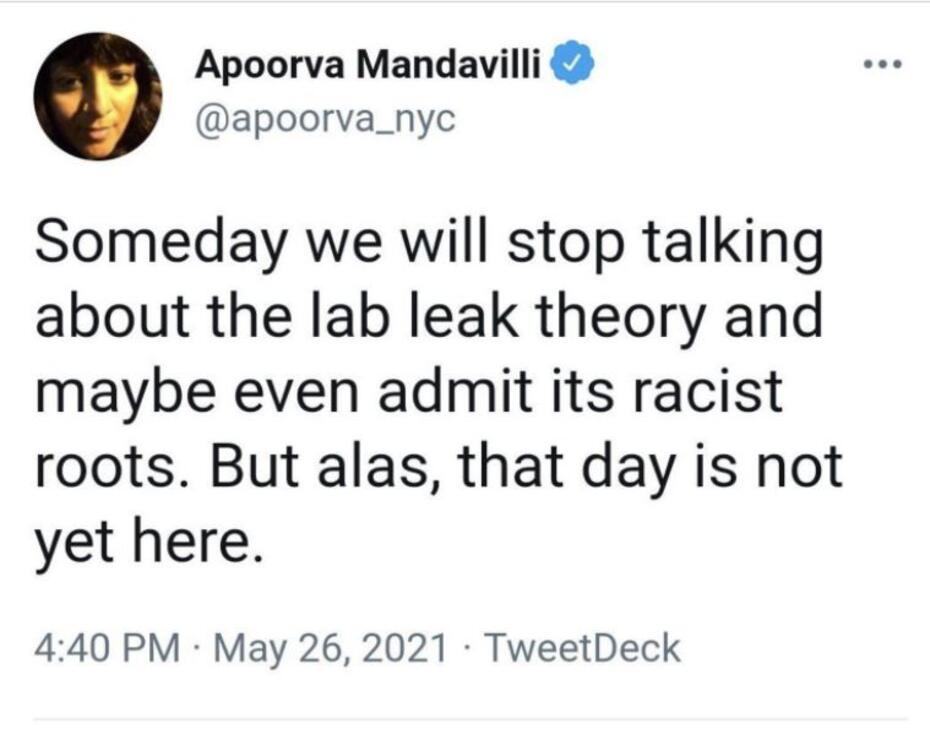 Can someone explain to me why it's racist to wonder if a virus escaped from a Chinese lab, but it's not racist to insist that it infected humans because of Chinese wet markets? If anything, isn't the latter more racist?

How is it possible that a New York Times reporter, tasked with covering the pandemic, believes that pursuing the truth, including taking seriously an ever-more-plausible theory about a deadly virus's origins, is “racist”?

…. The unintentionally hilarious thing about dismissing the lab theory as “racist” is that the alternative theory is that the world got sick because Chinese people eat bats or pangolins or something else gross.

Mandavilli defended her anti-journalistic take for a while, as captured by Fox News:

A theory can have racist roots and still gather reasonable supporters along the way," she wrote to a critic of her original point. "Doesn't make the roots any less racist or the theory any more convincing, though.

After much mockery and pushback, she cried victim:

“Ugh, I hate deleting tweets, but the reactions are … ridiculous. Lots of clown emojis (is that code beyond just calling me a clown), allusions to the [Chinese Communist Party] and also: Is ‘fronting corporate interests’ the new ‘pharma shill’ insult?”

I deleted my earlier tweets about the origins of the pandemic because they were badly phrased. The origin of the pandemic is an important line of reporting that my colleagues are covering aggressively.

Actually, it was pretty clear that she was calling adherents of the theory racists.

The mortifying Twitter incident is all the more reason to lament the paper’s firing, at the height of the pandemic, its main Covid reporter Donald McNeil because some spoiled woke twerps on a summer program had it in for him. McNeil himself wrote a comprehensive piece, "Why the Covid-19 'Lab Leak Theory" Needs Another Look," demonstrating the merit of the “lab leak” theory. But that important, comprehensive piece of journalism appears not in the Times, but on the online publishing platform Medium. Meanwhile, paying Times subscribers are stuck with Mandavilli’s unprofessionalism.