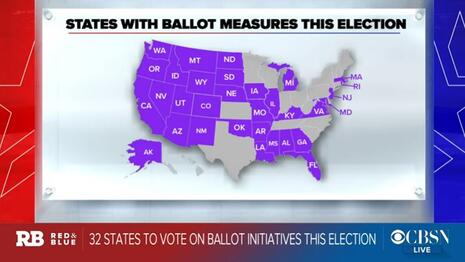 State ballot initiatives! Suddenly, the New York Times loves them, at least now that they're under threat by a power-hungry GOP. Saturday’s front page featured “G.O.P. Targets Ballot Initiatives To Stymie Democrats’ Agenda.” The online headline was even more dire: “Republicans Move to Limit a Grass-Roots Tradition of Direct Democracy.”

How strange then, to examine past Times coverage of ballot initiatives, during a period when they were mostly Republican-backed, and see the paper’s cynical, contemptuous attitude toward the exact same process when done on behalf of conservative issues like gay marriage.

These moves were all the product of ballot initiatives, a century-old fixture of American democracy that allows voters to bypass their legislatures to enact new laws, often with results that defy the desires of the state’s elected representatives. While they have been a tool of both parties in the past, Democrats have been particularly successful in recent years at using ballot initiatives to advance their agenda in conservative states where they have few other avenues.

But this year, Republican-led legislatures in Florida, Idaho, South Dakota and other states have passed laws limiting the use of the practice, one piece of a broader G.O.P. attempt to lock in political control for years to come, along with new laws to restrict voting access and the partisan redrawing of congressional districts that will take place in the coming months.

So far in 2021, Republicans have introduced 144 bills to restrict the ballot initiative processes in 32 states, according to the Ballot Initiative Strategy Center, a liberal group that tracks and assists citizen-driven referendums….

The next paragraph goes a long way toward explaining why the Times approves of them now:

Republicans are trying to block that path in a wide variety of ways, including blunt measures that take direct aim at the process and others that are more subtle.

The proposals to limit ballot initiatives are part of a running campaign by conservatives to box out progressive policy efforts. To get a referendum on the ballot, petitioners have to collect tens of thousands of signatures; the numbers vary by state. The process can cost millions, so the initiative campaigns are often underwritten by large donors.

It’s quite a sympathetic look at ballot initiatives, which is almost wholly lacking in previous coverage of more conservative proposals.

A front-page 2009 story by Jennifer Steinhauer, "In California, Democracy Doesn't Pay the Bills," came on the heels of her equally insulting piece "Calif. Voters Reject Measures to Keep State Solvent."

So much for that hallowed “grass-roots tradition” the paper is suddenly hailing in 2021, when Democrats stand to benefit.