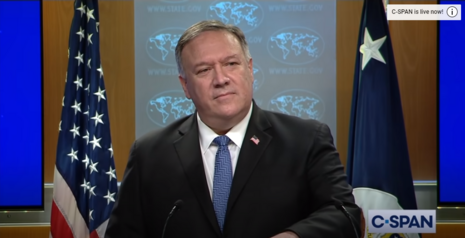 New York Times reporter Lara Jakes kicked Secretary of State Mike Pompeo out the door in her Tuesday story, “As Pompeo Exits State Dept., His Turbulent Tenure Leaves Dubious Legacy for the U.S.” It’s noteworthy for being absolutely crammed with the number of links it contains, suggesting a hit piece lovingly curated over a long period.

This is quite a lead sentence:

Spurned by many foreign allies, ridiculed by adversaries, disliked by a significant number of his own diplomats and trying to preserve his political future, Secretary of State Mike Pompeo last week offered an insight into his legacy as a commander of the Trump administration’s scorched-earth foreign policy by citing a seminal moment in his personal history.

In 1983, when Mr. Pompeo was a cadet at the United States Military Academy at West Point, an Iranian-linked militia bombed the Marine barracks in Beirut, Lebanon, killing 241 American troops. By his own telling -- “My life wouldn’t be the same after that,” Mr. Pompeo said on Tuesday, in his last public speech in office – it was a powerful indoctrination for a young soldier in training to protect the United States from deadly enemies.

Unsurprisingly, Jakes found a lot of liberal diplomats to excoriate Pompeo anonymously. It's also no surprise she took their opinion as gospel.

As he leaves office, Mr. Pompeo, 57, has been tagged by a number of officials and analysts with the dubious distinction of the worst secretary of state in American history. That will come back to haunt him as he considers running for president in 2024 or seeking another elected office, as he is widely believed to be doing.

Everything Pompeo accomplished was portrayed in hostile and cynical terms. An important decision on China's genocide against its Muslim population was dismissed as a "parting shot."

….Mr. Pompeo emerged as the administration’s most vocal critic of Beijing. He took every opportunity to highlight China’s human rights abuses of Uighur Muslims and other ethnic minorities and, as a parting shot, he is now considering whether to declare them acts of genocide.

He has also led global condemnation of Beijing’s expansionist ambitions and oppression in Hong Kong, Taiwan and the South China Sea. Other nations, however, have refused to follow the United States’ withdrawal from the World Health Organization, which stripped funding from the U.N. agency during the coronavirus pandemic, which Mr. Pompeo insisted on calling the “Wuhan virus,” again echoing Mr. Trump.

Even when Jakes admits to seeing some positives, like progress toward peace in the Middle East, she spun them negatively.

Mr. Pompeo has steadfastly supported Israel by defying internationally recognized norms, such as by moving the American Embassy in Israel to Jerusalem and declaring Israeli sovereignty over the Golan Heights and the legitimacy of West Bank settlements. As an evangelical Christian -- a group that makes up a key conservative political constituency -- Mr. Pompeo has sometimes framed actions against Iran in religious terms linked to Israel and biblical prophecy.

Jakes wasn’t done. A tweet that Pompeo sent out on Tuesday sent her into paroxysms of race-based outrage.

Multiculturalism “is not who America is,” Secretary of State Mike Pompeo said on his last full day at the State Department, a curious message from a diplomat whose own ancestors were immigrants from Italy, and one that ran counter to the United States’ long-held pride in being a melting pot of cultures.

In a post on Twitter, Mr. Pompeo, who has overseen a State Department where diplomats of color have been ignored, passed over or otherwise pressured to resign, also decried what he described as a sop to political correctness that he said “points in one direction -- authoritarianism.”

Jakes put her own paranoid partisan spin on the tweet. What does this have to do with Kamala Harris?

The tweet infuriated American diplomats abroad and in the United States who described it as a final insult by an administration that has promoted far more white male Foreign Service Officers than women or people of color….

Mr. Pompeo’s post was particularly notable in that it came the day before Kamala Harris will be inaugurated as the first woman of color to hold the office of vice president.