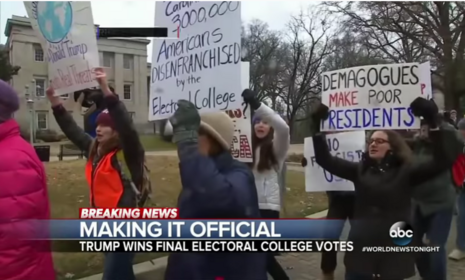 On the eve of the Electoral College formalizing Joe Biden’s presidential victory, New York Times reporters Lisa Lerer and Reid Epstein focused hard on the security precautions being taken for Democratic electors on the front page of Monday edition: “An Honor Becomes an Ordeal as Harried Electors Finally Meet.”

But in 2016, when leftist Democratic supporters foamed and threatened about Trump’s Electoral College win, the harassment of Republican electors was barely mentioned by the Times.

In Michigan, Democratic electors have been promised police escorts from their cars into the State Capitol, where on Monday they will formally vote for Joseph R. Biden Jr.

In Arizona, state officials are holding the vote at an undisclosed location for safety reasons, far from what is expected to be a heated hearing on election integrity issues that Republicans will conduct in the Statehouse.

This year, the Electoral College is another piece of routine election mechanics thrown into the cross hairs of President Trump’s sustained assault on voting integrity. After five weeks of lawsuits, recounts and Republican inquiries into unfounded claims of fraud, Americans will turn to the 538 members of the Electoral College to provide a measure of finality to Mr. Biden’s decisive victory.

“Trump supporters did not get the same kind of vitriol in 2016,” said Khary Penebaker, a Democratic elector from Wisconsin who will be casting his vote for Mr. Biden at the State Capitol in Madison. “This is some scary stuff, man, and this is not what America is supposed to be like.”

Despite the legal losses, much of the party has rallied behind the president’s push to overturn the will of millions of voters, giving rise to a wave of outrage and threats from supporters who now believe the president’s conspiracy theories.

The Times also ran opinions threatening to overturn the 2016 election results via Electoral College sabotage, and prominent articles like “U.S. Officials Defend Integrity of Vote, Despite Hacking Fears.” By its own reasoning, did the Times also give rise to a wave of outrage and threats from Hillary Clinton supporters?

Presidential electors are bound by tradition and often state law to support their party’s candidates. But this time, many Republican electors were inundated with phone calls, emails and even threats demanding that they vote for someone other than Mr. Trump.

The paper managed only a single sentence, in an online-only opinion section “hate” roundup, about a Detroit News scoop of death threats against a Republican-pledged elector Michael Banerian: “Michigan electors cite threats over Trump vote.”