Former New York Times chief book critic Michiko Kakutani fulfilled her reputation for sucking up to President Barack Obama (while damning biographies that came up short of hagiography) in her long interview with the former commander-in-chief, “Self-Portrait Of a Storyteller And a President – Barack Obama, the best-selling author, on reading, writing and radical empathy in his latest memoir A Promised Land.”

It came in a huge spread with a large color photo of Obama on the front page of the Arts section on Wednesday. Inside were black-and-white pictures of Obama at Selma on the 50th anniversary of the Voting Rights Act in 2015, Obama in the office of the Harvard Law Review in 1990, and Obama in silhouette against the clouds speaking for Biden a few weeks ago.

Kakutani is notorious for letting her personal liberal politics infect her aesthetic judgment. In January 2009 she praised Obama’s "love of fiction and poetry" that "imbued him with a tragic sense of history and a sense of the ambiguities of the human condition." In 2018, she wrote an angry little book titled The Death of Truth – Notes on Falsehood in the Age of Trump.

With A Promised Land in hand, Kakutani has another excuse for toadying, conducting a hagiographic phone interview with the prose-mastering former president: 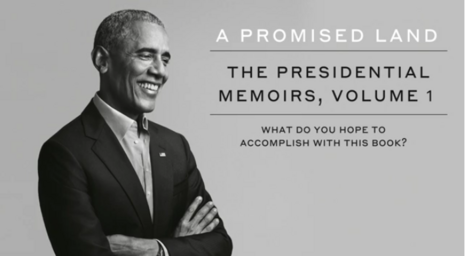 Barack Obama’s new memoir A Promised Land is unlike any other presidential autobiography from the past -- or, likely, future….It attests to Mr. Obama’s own storytelling powers and to his belief that, in these divided times, “storytelling and literature are more important than ever,” adding that “we need to explain to each other who we are and where we’re going.”

In a phone conversation last week (a kind of bookend to an interview I did with him during his last week in the White House in January 2017), Mr. Obama spoke about the experience of writing his new book and the formative role that reading has played, since his teenage years, in shaping his thinking, his views on politics and history, and his own writing. He discussed authors he’s admired and learned from, the process of finding his own voice as a writer, and the role that storytelling can play as a tool of radical empathy to remind people of what they have in common -- the shared dreams, frustrations and losses of daily life that exist beneath the political divisions.

Mr. Obama speaks slowly and thoughtfully but with the conversational ease that distinguishes his books, moving freely between the personal and the political, the anecdotal and the philosophical. Whether he’s talking about literature, recent political events or policies implemented by his administration, his observations, like his prose, are animated by an ability to connect social, cultural and historical dots, and a gift -- honed during his years as a community organizer and professor of constitutional law -- for lending complex ideas immediacy and context.

After observing Obama has “a flair for creating sharply observed, Dickensian portraits of advisers, politicians and foreign leaders,” she compared the liberal president to....Abraham Lincoln?

The scholar Fred Kaplan, the author of Lincoln: The Biography of a Writer, has drawn parallels between Abraham Lincoln and Mr. Obama, pointing out that they share a mastery of language and “a first class temperament” for a president -- stoic, flexible, willing to listen to different points of view.

Kakutani mined Obama’s vast book (the first of a threatened two in a series) for more of Obama’s mind-droppings.

Like Lincoln’s, Mr. Obama’s voice -- in person and on the page -- is an elastic one, by turns colloquial and eloquent, humorous and pensive, and accommodating both common-sense arguments and melancholy meditations (Niagara Falls made Lincoln think of the transience of all life; a drawing in an Egyptian pyramid makes Mr. Obama think how time eventually turns all human endeavors to dust).

This article once again finds a famous American politician who claims to write in longhand. "Because he thinks the computer can lend 'half baked thoughts the mask of tidiness,' he writes his first draft longhand on yellow legal pads." And as usual, there's no hint of ghostwriting or research assistance.