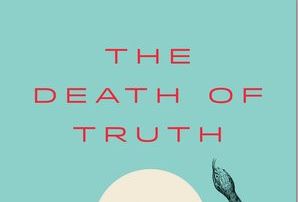 For years, Michiko Kakutani was the most feared and revered New York Times book critic. Now the reviewer becomes the reviewed with her new book with a self-explanatory title: The Death of Truth – Notes on Falsehood in the Age of Trump. And that’s all you really need to know.

On the plus side, it’s short. Yet this slim, 173-page undersized hardback still manages to be a slow read, dense and repetitive.

Among the many pungent lines:

The assault on truth and reason that reached fever pitch in America during the first year of the Trump persidency has been incubating for years on the fringe right....And with Trump's winning of the Republican nomination and the presiency, the extremist views of his most radical supporters -- their racial and reilgious intolerance, their detestation of government, and their embrace of conspiracy thinking and misinformation -- went maintream.

Somehow she managed to make it to page 41 without a direct Hitler reference: "People were slow to recognize the danger Hitler represented."

Every chapter is a rehash from a slightly different angle of the main tedious and self-satisfied theme of Trump and his ilk as an anti-truth squad. You know when a sentence starts “As Lincoln well knew...” that you’re in the land of banality and cliche. Unfortunately, Kakutani has retained her habit as a critic of quoting big blobs of text she agrees with into her own writing.

She even reprinted the text of that insufferable CNN promo ad, featuring the apple that’s not a banana, as if the error-prone, Trump-loathing channel equals reality.

The volume is beset by contradictions. She cites polls showing that Americans embrace conspiracies -- then cites other polls about opposition to guns and net neutrality in order to mock Trump and the GOP’s denial of reality. So, the same people who embrace conspiracy theories are the ones we should be trusting to decide policy issues?

To trump Trump, she uses Al Gore’s 2007 jeremiad The Assault on Reason, which she quoted at length in her laudatory New York Times review from the time. In her book she lauded his reasoning:

[Trump] represents the culmination of trends diagnosed in prescient books by Al Gore, Farhood Manjoo, and Susan Jacoby...As for Gore...he underscored the ailing condition of America as a participatory democracy (low voter turnout, an ill-informed electorate, campaigns dominaetd by money, and media manipulation)....

Meanwhile, Gore’s anti-scientific predictions of a 20-foot sea level rise and desire to get rid of the “internal combustion engine” go unremarked.

As shown, she’s selective in her partisan outrage and defense of “truth.” For Kakutani, the embrace (by many Republicans) of the controversial “The Flight 93 Election” article proved the nihilism of the present-day GOP. But liberals predicting that Trump’s election, Net Neutrality, Brexit, global warming, Trump’s tax plan, etc. will somehow lead to global apocalypse? Apparently, that’s just common sense.

Occasionally she throws a pox on both houses, particularly when tracing -- among the book’s many repetitions -- how the deconstructionism and postmodernism of the academic left in the 1960s reduced plain language into a deceptive interface and led us indirectly to this era of falsehood.

But Kakutani could have gone further into the science-denying left, with their fears over nuclear power (which even France has embraced), or genetic modification ("Frankenstein Foods"). Not to mention the embrace of apocalyptic visions of drowned cities and mass death as a result of global warming. Anti-vaccination comes up only briefly, and without linking it to paranoid liberalism.

She gave Bill Clinton a brief bit of grief for his infamous it “defends on what the meaning of the word ‘is’ is.” But there was no suggestion that the Clinton’s continuing presence in Democratic political life indicates Democrats have as high a tolerance for deceit as Republicans. She also issuesd a laughable list of “conservatives,” which includes MSNBC host Joe Scarborough and Washington Post writer Jennifer Rubin.

First, like many people watching where I was overseas, I admit I was shocked by the exceptionally high bar put before one candidate and the exceptionally low bar put before the other candidate....I learned long ago, covering the ethnic cleansing and genocide in Bosnia, never to equate victim with aggressor, never to create a false moral or factual equivalence, because then you are an accomplice to the most unspeakable crimes and consequences.

Kakutani the book critic is obviously widely read, but here she mostly cites a few big names over and over. When she does step out of that comfort zone, the results are ludicrous. She located a 1980s harbinger of Trump: Joe Isuzu, from those annoying car commercials. Rush Limbaugh, again. Why not throw in Harold Hill from The Music Man? Or Guy Smiley from Sesame Street?

In fact, the president of the United States often seems less like a persuasive character than some manic cartoon artist’s mashup of Ubu Roi, Triumph the Insult Comic Dog and a character discarded by Moliere.

That's at least an educated and original attempt at wit, which Kakutani is capable of when she wishes. Still, there’s nothing here not said better elsewhere in a much shorter and free format.