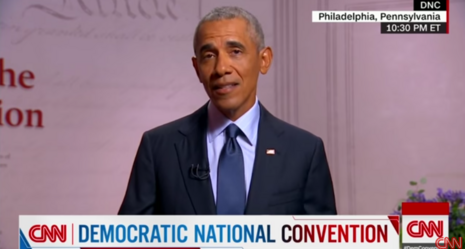 The third night of the virtual Democratic National Convention was highlighted by a scathing speech by former president Barack Obama attacking his successor Donald Trump. White House correspondent Peter Baker’s lead story on Thursday used Obama’s speech to both praise the former president and denigrate the current one, a welcome two-fer for the paper’s liberal readership under the headline “Obama Sees Chance to Save a Legacy Under Siege.”

Baker commiserated with Obama, let down by the American people, and worked with the former president to restore his reputation.

Shortly before the 2016 election, President Barack Obama told supporters that he would consider it “a personal insult” if America chose a bombastic reality television star who trafficked in racist conspiracy theories and stood against everything that he had spent eight years building.

America did it anyway. “This stings,” Mr. Obama confessed afterward.

Four years later, Mr. Obama returned to the national stage on Wednesday night seeking vindication with an implicit defense of his own record and an indignant condemnation of President Trump as a corrupt and failing leader who has used his office to enrich himself, pit Americans against each other and threaten American democracy.

“Donald Trump hasn’t grown into the job because he can’t,” he said in a 19-minute Democratic convention speech from the Museum of the American Revolution in Philadelphia. “And the consequences of that failure are severe: 170,000 Americans dead. Millions of jobs gone while those at the top take in more than ever. Our worst impulses unleashed, our proud reputation around the world badly diminished, and our democratic institutions threatened like never before.”

Baker was impressed with the paranoid turn of Obama’s speech:

On Wednesday, his message was darker, a reflection of a country changed by crisis and a party desperate to oust an incumbent president. He offered a grim warning about the durability of American democracy.

Shifting to Trump’s actual 2016 opponent, former Times White House correspondent Frank Bruni contributed this sycophancy to an online discussion at nytimes.com. Will Hillary Clinton ever be able to forgive the American people?

It’s commonplace -- a cliché -- for leaders to talk about their stubborn faith in America, about how great we truly are. But to hear that from Hillary Clinton, in an upbeat voice, after what went down in 2016? It was genuinely moving. It made you want to prove her right.

Reporters Lisa Lerer and Glenn Thrush also hailed the 2016 loser: “In a Bittersweet Return, Clinton Goes From Bearing a Torch to Passing It.”

Yet, this moment is uniquely emotional for Mrs. Clinton and the tens of millions who propelled her to a popular-vote majority of nearly three million in 2016, but a loss in the Electoral College. It is both a reminder of a job some allies still maintain was unfairly taken from Mrs. Clinton and the wave of feminist activism sparked by her loss….