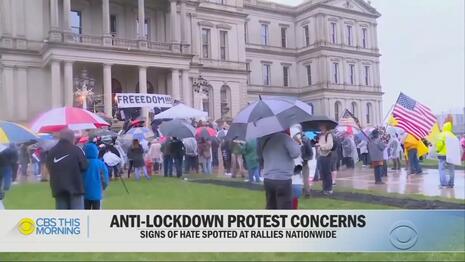 Are American freedom and individualism to blame for the failure to contain the coronavirus? That was one premise of the lead story in Friday’s New York Times by David Leonhardt: “U.S. Is Alone Among Peers In Failing to Contain Virus – 2 Major Causes: Individualist Tradition and Trump Administration Missteps.”

First, the United States faced longstanding challenges in confronting a major pandemic. It is a large country at the nexus of the global economy, with a tradition of prioritizing individualism over government restrictions....

Leonhardt even bashed Trump’s travel ban, loathed by liberals at the time, with the odd criticism that it was not restrictive enough, legality be darned.

But it quickly became clear that the United States’ policy was full of holes. It did not apply to immediate family members of American citizens and permanent residents returning from China, for example. In the two months after the policy went into place, almost 40,000 people arrived in the United States on direct flights from China.

Would the Times have really been on board with Trump preventing permanent residents of Chinese descent from returning to the United States?

The Times repeated the individualism dig in a photo caption: “The American tradition of prioritizing individualism over government restrictions hindered containment of the virus.”

Leonhardt made a few rare concessions that Democrats (and the World Health Organization) have had their share of failures. But mostly he put the burden of pandemic deaths on Trump, Republican voters, and of course, conservative networks like Fox News.

Leonhardt even let Democrats off the hook:

These comments have helped create a large partisan divide in the country, with Republican-leaning voters less willing to wear masks or remain socially distant. Some Democratic-leaning voters and less political Americans, in turn, have decided that if everybody is not taking the virus seriously, they will not either….

The Republicans made me do it?

This year’s festival may attract about 250,000 people despite an uptick in coronavirus cases across the state, city officials say, leading to fears it could become a super-spreader event.

When the virus upended life across America in the spring, it forced the cancellation of graduation ceremonies, music festivals, marathons and other large gatherings. Sturgis, which has hosted the rally since 1938, pushed ahead with its plans anyway.

Notice anything missing from that rundown of types of “large gatherings”? Yep, not a word on the massive racial protests that engulfed the streets for weeks with hardly a mention of virus risks.

The 10-day rally, which begins Friday, may be the country’s largest public gathering since the pandemic began, and it comes amid widespread opposition….

Not a single word by the hypocritical Times on the other "public gatherings" taking place -- the massive protests (sometimes turning into riots) in the aftermath of the police killing of George Floyd. The paper itself bragged about the size of the nationwide protests, with no scientific warnings about the dangers of potential “super-spreader events.” The paper bragged in early July:

The recent Black Lives Matter protests peaked on June 6, when half a million people turned out in nearly 550 places across the United States.

Walker even issued a follow-up from Sturgis, SD on Saturday, warning:

Tens of thousands of motorcyclists roared into the western South Dakota community of Sturgis on Friday, lining Main Street from end to end, for the start of an annual rally that kicked off despite objections from residents and with little regard for a public health emergency ravaging the world.

Again, the same thing could be said for the rallies and riots over racial justice that convulsed U.S. cities for months. Just more reasons why it’s hard to take the New York Times seriously when it blames American rampant individualism for the coronavirus spread. Individualism has worked pretty well for us for over 200 years.