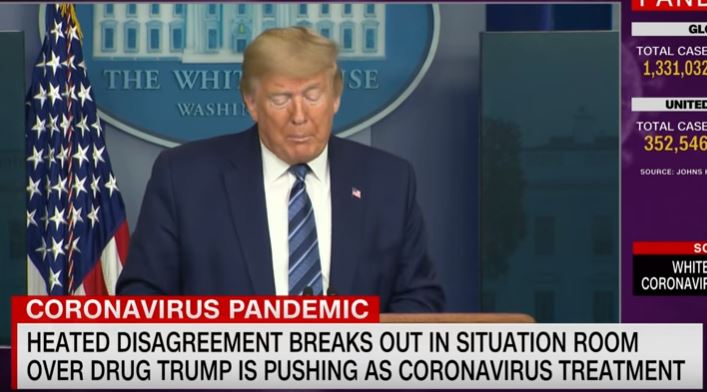 A new anti-Trump angle on the coronavirus crisis made the front page of Tuesday’s New York Times. Reporters Peter Baker, Katie Rogers, David Enrich, and Maggie Haberman on the angst over the president’s promotion of hydroxychloroquine as a possible treatment: “Trump’s Promotion of Drug Divides the Experts.”

The story went off the rails in paragraph five with the silly charge of financial conflict of interest, questioning Trump’s “motives” for pushing the drug. (Wait until the end for the punch line.)

Mr. Trump may ultimately be right, and physicians report anecdotal evidence that has provided hope. But it remains far from certain, and the president’s assertiveness in pressing the case over the advice of advisers like Dr. Anthony S. Fauci, the government’s top infectious disease specialist, has driven a wedge inside his coronavirus task force and has raised questions about his motives.

If hydroxychloroquine becomes an accepted treatment, several pharmaceutical companies stand to profit, including shareholders and senior executives with connections to the president. Mr. Trump himself has a small personal financial interest in Sanofi, the French drugmaker that makes Plaquenil, the brand-name version of hydroxychloroquine.

The Times apparently queried everyone in or near the Trump organization.

Some associates of Mr. Trump’s have financial interests in the issue. Sanofi’s largest shareholders include Fisher Asset Management, the investment company run by Ken Fisher, a major donor to Republicans, including Mr. Trump. A spokesman for Mr. Fisher declined to comment.

As of last year, Mr. Trump reported that his three family trusts each had investments in a Dodge & Cox mutual fund, whose largest holding was in Sanofi.

The cheap, generic drug isn’t even made in the United States.

Ashleigh Koss, a Sanofi spokeswoman, said the company no longer sells or distributes Plaquenil in the United States, although it does sell it internationally.

Even George Conway, “conservative” Trump-obsessive extraordinaire, dismissed the charge: “He owns some mutual funds that hold Sanofi. And the med is off-patent. The suggestion that this is significant is a huge stretch.”

It got even more ridiculous even as the paper softly confessed that other drugmakers were also making the pills.

Several generic drugmakers are gearing up to produce hydroxychloroquine pills, including Amneal Pharmaceuticals, whose co-founder Chirag Patel is a member of Trump National Golf Course Bedminster in New Jersey and has golfed with Mr. Trump at least twice since he became president, according to a person who saw them.

Mr. Patel, whose company is based in Bridgewater, N.J., did not respond to a request for comment....Other generic drugmakers are ramping up production, including Mylan and Teva Pharmaceutical Industries.

Excitable Times reporter Ken Vogel was taken in on Twitter, even capitalizing the villain’s name: “NEW: If hydroxychloroquine becomes an accepted coronavirus treatment, several companies stand to profit, some with shareholders & execs connected to TRUMP. Trump himself has a small interest in @Sanofi...."

But a Financial Times journalist looked at Trump’s financial disclosures and pegged Trump’s personal stake at between $30-$450. Not the next Watergate, or even Russiagate.