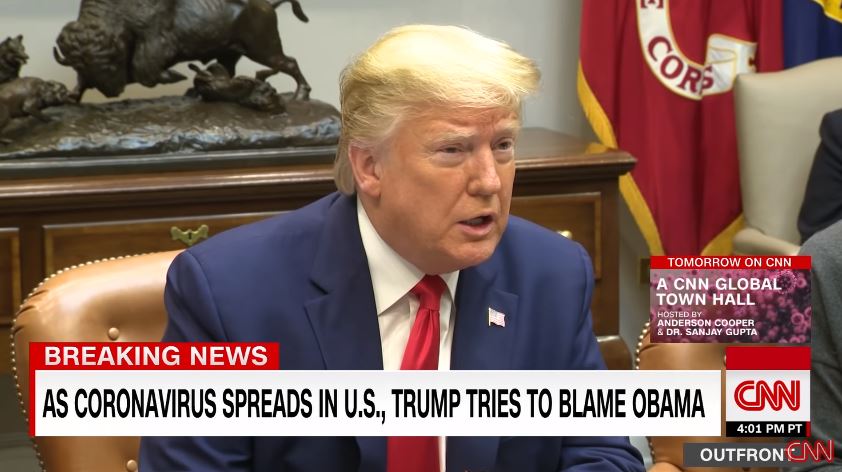 More coronavirus bias from the New York Times, with congressional reporter-columnist Carl Hulse on Thursday, “A Sense of Emergency And Fear Can Become Powerful Political Tools,” pretending that only Republicans play partisan politics with potential pandemics.

Last week on Fox News, Senator Tom Cotton, Republican of Arkansas, lamented how it was “very disappointing to see the other party trying to politicize” coronavirus when national unity should be the order of the day. But six years ago, it was a different story when Mr. Cotton, then running for the Senate as Republicans worked to seize the majority, hit the Obama administration for “not protecting our country and our families from Ebola.”

Mr. Cotton was far from the only one.

Republican candidates and their conservative allies pounded Democrats and the Obama White House over their handling of the Ebola crisis in the weeks before the 2014 elections....

It was a stark example of how a nationwide health crisis and the public anxiety it can provoke can be exploited as powerful political weapons in election years. Now, with the tables turned and a Republican president in the White House, Democrats are working to use the administration’s response to the novel coronavirus to amplify their own campaign messages, and Republicans are quick to charge that they are improperly politicizing the outbreak.

(The Democrats could even be said to be “pouncing” on the issue, or at least "pounding" themselves, like Hulse accuses Republicans of doing.)

Democrats said they were simply highlighting administration resistance to taking action to lower drug prices, a theme they have made a centerpiece of their 2020 campaign to hold the House majority.

As always, Hulse lives for turning the tables on a supposedly hypocritical GOP with help from Obama loyalists.

The Republican call for nonpartisan solidarity has not escaped the notice of veterans of the Obama administration who found themselves under fire over Ebola in the fall of 2014. Republicans regularly accused the White House of a lack of preparedness even though less than a dozen people were ultimately treated for the disease in the United States. Two who contracted it elsewhere died in American hospitals.

But the Times was much harsher on Republicans who criticized Obama over his Ebola response in 2014. Jeremy Peters scolded:

Hear it on cable television and talk radio, where pundits and politicians play scientists speculating on whether Ebola will mutate into an airborne virus that kills millions.

Also on Thursday, reporters Maggie Haberman and Annie Karni positively gloated in a “news analysis,” “A Bad Week for the President, Made Worse by Biden.”

On Monday, President Trump was already having a bad week.

The coronavirus was spreading, the stock market was plummeting and his administration was getting blamed for an inadequate response to a health crisis.....He has dealt with the coronavirus, the first external crisis of his administration, by repeating a string of falsehoods rather than delivering reassurance....