The New York Times used the coronavirus story as a carrier for the same Trump-bashing that infects the paper like the common cold. Thursday’s edition led with the banner headline, “Trump Taps Pence To Lead As Virus Spreads.” Underneath was “news analysis” by Annie Karni, Michael Crowley, and Maggie Haberman, “Facing Potential Test in Public Trust, Too.”

They led with Trump’s silly “Sharpie” moment during Hurricane Dorian, then raised the stakes. 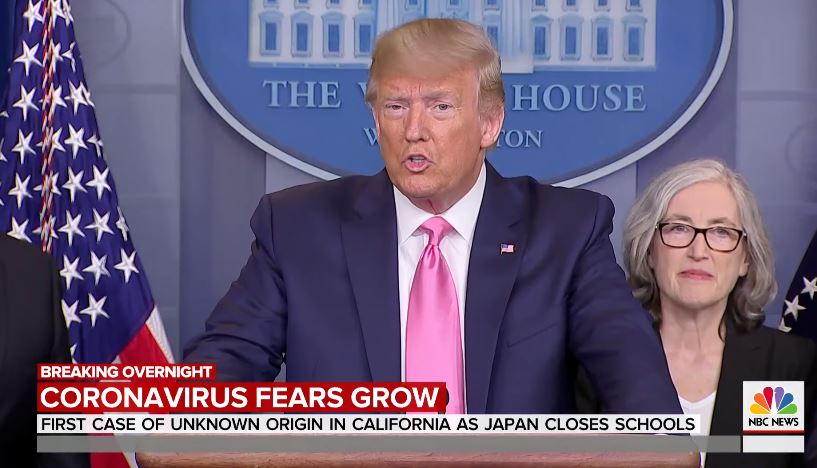 For years, experts have warned that Mr. Trump has been squandering the credibility he could need in a moment of national emergency, like a terrorist attack or a public health crisis.

Now, as the coronavirus races across the globe and has begun to threaten the United States, Mr. Trump could face a moment of reckoning. Maintaining a calm and orderly response during an epidemic, in which countless lives could be at stake, requires that the president be a reliable public messenger.

The hit piece was conveniently loaded with critics from the Obama administration like Kathleen Sebelius, secretary of health and human services.

For three and a half years, Mr. Trump has repeatedly proved an unreliable narrator on a range of subjects.

At times, he has exaggerated threats, like talking up the caravans of migrants he claimed were storming the southern border before the 2018 midterm elections. Other times, he has minimized potentially serious dangers that could be politically damaging....

But the Times itself used the term “caravan” (without quotation marks) in headlines, suggesting the paper itself admitted their existence.

In his response to the coronavirus, Mr. Trump has made inaccurate or questionable claims, twice misstating the number of Americans infected with the virus and insisting that it “miraculously goes away” when warmer spring weather arrives -- a prediction that health experts have said is premature.

The reporters reached back to impeachment.

And polls show that Mr. Trump’s credibility with much of the United States is low after an impeachment inquiry in which a majority of voters said they did not believe that he was telling the truth about his actions involving Ukraine.

They took care to paint a contrast with the Obama administration.

As Ebola presented both a health and political threat to his administration in 2014, Mr. Obama carefully hewed to proven science, which he repeatedly invoked in his carefully calibrated public messages.

Mr. Trump, in contrast, has not been focused on scientific detail. The secretary of health and human services, Alex M. Azar II, has told officials they should give the notoriously impatient president simple, paint-by-numbers briefings on coronavirus.

This wishful prediction served to poison the well against the president during a crisis:

As Mr. Trump faces this emergency, his history of issuing false claims could make it harder to sell the public on any plans to address coronavirus.

It was quite a contrast from the paper’s sickly assurances in 2014, when the Obama White House was tackling the Ebola threat. The Times spread premature claims that the administration had the disease under control.