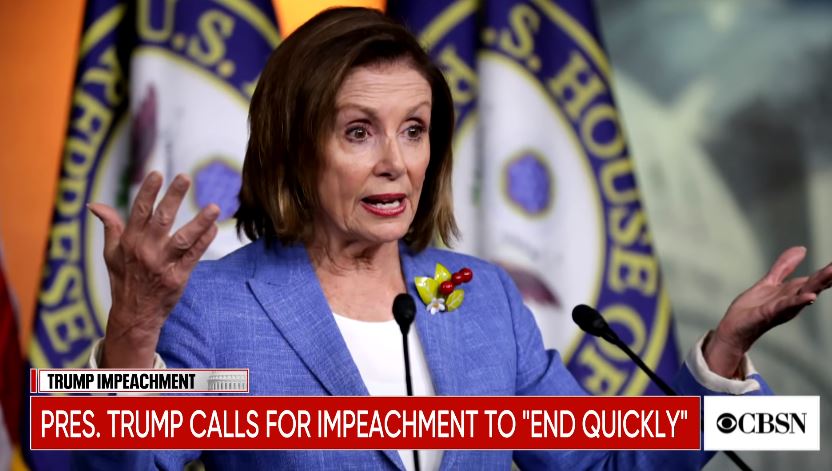 Alisha Haridasani Gupta, who writes the New York Times’  feminist newsletter “In Her Words,” made Page Two of Tuesday’s edition with “Powering the Democratic Party.” She interviewed Times’ reporter Lisa Lerer about Speaker Nancy Pelosi. The piece is a truncated version of a month-old Q&A from Gupta’s newsletter (excerpts from original version below), suggesting its sole function is to welcome back Pelosi as the impeachment fight resumes.

Gupta opened with an approving anecdote of a politician attacking a journalist, an odd stance for a journalist .

....just as she was ending a session with the press, a reporter asked her if she decided to move ahead with the impeachment process (her second as a member of Congress, she was also a legislator when President Clinton was impeached) because she hated the president.

She was not pleased.

She wagged her finger at the reporter and stormed back to the podium. Then, staring straight at the camera, she delivered a dramatic retort.

“This is about the Constitution of the United States and the facts that lead to the president’s violation of his oath of office,” she said sharply. “As a Catholic, I resent your using the word ‘hate’ in a sentence that addresses me. I don’t hate anyone.”

“So don’t mess with me,” she added, before gliding out of the room, metaphorical and literal white suit intact.

And just like that, the one-time impeachment-wary leader who was once seen as a liability for many in her own party cemented her position as an impeachment warrior who managed to rally her party behind her and steer the process through the House with a measured hand.

A Times’ article may clarify why Gupta would approve of Pelosi’s attack on a reporter –  he was “James Rosen, a reporter for a conservative television network, Sinclair Broadcast Group” who dared ask Pelosi the “hate” question.

Speaker Nancy Pelosi lashed out in anger on Thursday at a reporter who asked whether she hated President Trump, prompting Mr. Trump to accuse her of having ‘a nervous fit.’

Gupta talked to Lerer “about Pelosi’s transformation into the Democratic Party’s heroic icon and her meticulous leadership style.

Some of Gupta’s “questions”:

Lisa, in January you wrote that Pelosi “might just be the most powerful politician in the country.” And that was before the whole impeachment process. Do you think that’s still the case?

And Pelosi totally understands the power of that image, too, right? [When Lerer interjected with “That jacket!” Gupta followed up with, “Exactly -- she dresses for the occasion and wields those striking moments to her advantage.”]

All the profiles I’ve read of Pelosi describe her as meticulous and careful. Do you think she has to be because she’s a woman and is held to more stringent standards?